Allow me to show you that I'm in a league of my own.

Hotaru Nomoto
Akira Yukishiro (雪代 晶 Yukishiro Akira) is a character in the Shōjo☆Kageki Revue Starlight franchise, original to Re LIVE. She is one of the elite students from the Music Acting Department at Siegfeld Institute of Music with the title "Frau Platin" who is said to be the most talented student in the history of the esteemed Siegfeld Insitute of Music. Cool but uncompromising, she clashes frequently with those around her and usually wins out due to her overwhelming ability [1].

Akira has waist-length silver-purple hair. She wears two black ribbons on the sides, tying up part of her hair by her ears. She has purple eyes.

Akira’s school uniform consists of a beige collared formal jacket, which has a vest design to it including having the right side overlay on the left with four buttons to hold it closed. On her left shoulder is the Seigfeld school emblem. The sleeves cuffs are black with a beige stripe in the center. She wears a dark purple sweater vest underneath the jacket. She wears another white collared shirt underneath both of those. Attached to the white shirt is a dark purple bow. The ends of the bow reach her stomach. The bow has a red center. She wears a black pleated skirt and grey tights. She wears black loafers.

Her casual outfit consists of a navy blue shirt with the top being roses. Two inches after the roses is a partially see-through area with rose designs. The rest is solid navy blue. She wears a light blue formal jacket and a knee-length white skirt.

Her Revue outfit consists of a black vest with golden trims. There are two sets of buttons with a thick golden string with one on her chest and one on her stomach. On the left breast she wears a blue medal. Under the vest is a white collared button-up with thin stripes. She has a black checker with a black gem in the center under the collar. She wears a thigh-high white skirt. She had a black belt around her waist that turns into a cape around the sides and back. There are three connected stripes of gold on the end of the cape. In the center of the belt there is a golden emblem and a black stripe coming off and under the left side cape. She has knee-high black boots that are folded over at the top to look like a collar. The boots’ collar has a gold trim. The boots have heals. Around her shoulder is a jacket. The main color of the jacket is white. It has gold trims and golden ropes at the collar. One rope is tied loosely around her chest to hold it on. The underside of the jacket is blue with three unconnected golden stripes toward the bottom. On the outside, the jacket has four inches of the edge being a light blue. Right above the light blue are three unconnected gold stripes. The jackets sleeves are cuffed, having a golden trim and a golden button.

Akira can be seen as intimidating by the students of Siegfeld. She is well-respected in the school as its top student and is often admired and looked up to. At first glance, she is quite stoic, harsh, and not very good at understanding other people’s feelings. However, this is rooted in her profound passion for acting and theater. As such, she values loyalty and dedication towards the stage above anything else. She disdains people who take on challenges with a clear knowledge of its risks and sacrifices only for them to not honor their word. This was shown in the Stranded Stage Girls event where she lashed out at former edel Fumi Yumeoji for her “betrayal” of Siegfeld — and of Akira herself.[2]

Unbeknownst to others, Akira maintains a composed and resolute act in order to match the expectations of the people around her, especially as she bears the title of “Frau Platin”. Beneath her harsh exterior, she is actually quite caring and perceptive, seen in her ability to spot stage girls with potential such as the timid Shiori Yumeoji, and in how she reaches out to those who are shunned for their passion and interests such as Yachiyo Tsuruhime’s proclivity for make-believe.[3]

Much like Maya, Akira is not one to rest on her laurels and acknowledges those who relentlessly work to go above and beyond her expectations. Due to this, she also places extremely high standards upon herself. She refuses to tolerate half-hearted efforts from her peers and would firmly reprimand them for not giving something their all; encouraging them to aim higher and realize their true potential. Moreover, as leader of the Edels, Akira always strives to set an example for her fellow stage girls. This makes her prone to self-sacrifice for their sake, such as when she went without eating in Stranded Stage Girls because "It's only natural for those who do the work to get the food."[4]

Akira and Michiru are childhood friends that aspired to enter Siegfeld together after seeing a performance of Elysion as children. They made a promise to become Edels at Siegfeld someday, with Michiru promising to do anything in her power to help Akira become Frau Platin. Since growing up Akira still considers Michiru her closest friend and confidant, seeming to greatly admire and have a deep trust in her.

Before Fumi moved to Rinmeikan, Akira and Fumi were once students in Siegfeld during their first years. It was Michiru who persuaded Fumi to join as an Edel, and before the final stage's exam, Akira held high esteem on Fumi, with both being serious and dedicative. However, for one reason, Fumi later had a disastrous performance which led her to suffer trauma and scrutiny. This has severed their relationship since.

During a discussion with Shiori as Shiori cries to demand where is Fumi and what has happened to her, Akira admits her high pressure and forcible attitude has a major impact on Fumi's failure in the final exam as a stage girl, and regrets for being unable to keep Fumi.

Compared to how she treats her fellow Edels, Akira is more lenient when it comes to Shiori and often dotes on her, likely due to her age and frailty. In fact, it can often be noted that Shiori tends to bring out a trace amount of tenderness in Akira. However, this doesn't mean that she can't be strict with Shiori in order to get her to improve.

As Tendo Maya is the top of the 99th class of Seisho Music Academy, Akira sees Maya as a worthy rival even if they have a different approach to performance.[5] They have been rival since junior high.

Akira initially takes little interest in Karen, although Akira is marveled at Karen after Karen intervenes to save Maya after Akira manages to corner her. Akira comments that it's interesting to see the other stage girls of the Seisho Academy to be outstanding, stating that she initially thought no one would come close to Maya.[6]

Agent Lady A
Add a photo to this gallery

Pajama Party Akira & Koharu
Add a photo to this gallery 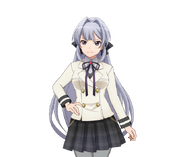 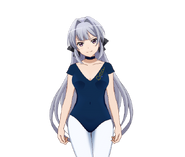 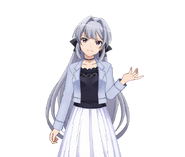 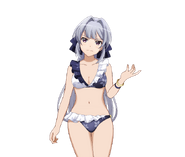 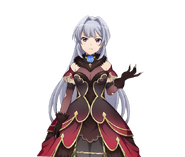 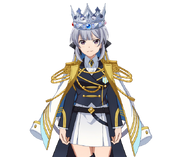 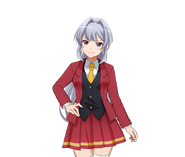 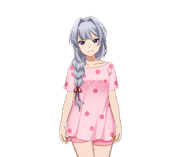 Pajama Party
Add a photo to this gallery

Retrieved from "https://revuestarlight.fandom.com/wiki/Akira_Yukishiro?oldid=14995"
Community content is available under CC-BY-SA unless otherwise noted.