Singing and dancing every day... Being a Stage Girl is great!

Aruru Otsuki (大月 あるる, Ōtsuki Aruru) is a character in the Shōjo☆Kageki Revue Starlight franchise, original to Re LIVE. She is a first-year student from the Stage Expression Course at Frontier School of Arts.

Always smiling with a naturally cheerful disposition, this Stage Girl never lets anything get her down. She was an amateur with no acting experience, but thanks to her earnestness and ability to get people around her involved in things, she is growing rapidly. She is convinced she is blessed with good luck [2].

Sparkling bullets, loaded onto wings and heading into the wilderness, looking for a free stage.
The spotlight is a goldrush, and with both hands, grab onto that BIG DREAM!
Stage Girl — Aruru Otsuki! Against the wind, to Frontier!

Aruru has long blonde hair that is usually put up in a ponytail with bangs swept to the left. There are three star hair clips she wears, one of the right side and two of the left side. She has yellow-brown eyes.

Her Frontier School of Arts uniform consists of a white button-up shirt, a yellow tie, a black vest, a burgundy blazer, a burgundy pleated skirt with gold trimmings, thigh-high white socks, and gold shoes. Her accessories consist of star pins that she uses to decorate her hair.

Aruru's casual outfit consists of a white tee-shirt with the words "Twinkle ☆ Twinkle" on it. She wears a light purple jacket over top of it that has yellow stars on the upper part of it. She wears a yellow skirt with a brown waistband.

Her Revue outfit consists of a black and white strapless top, a yellow jacket, thick brown gloves, a red scarf with a golden button with a star on it holding it together, two brown belts going opposite direction around her waist, a pale orange skirt with white frills, two brown gun holsters on her thighs, and brown calf-high boots. The boots have two straps with a golden buckle on them. The top edges of the boots have a gold lining. The boot splits in the middle down to the ankle. Those edges are also Lines in a gold trim. The bottom of the boots also have the golden trim as well.

Aruru is a cheerful and energetic person who never lets anything put her down. Her energetic behavior helps her be optimistic about anything, even the most difficult tasks. She believes in the potential of others and is always excited to explore unknown possibilities.

In later stories, it is confirmed that part of her personality is a facade, in reality Aruru has a somewhat solitary personality and has the tendency to act so as not to have conflicts due to her time in the orphanage, in case there is a conflict she isolates herself by avoid causing harm to the people she cares about.[3]

Aruru had no experience as a performer until she attended the school. The closest thing she had to real experience prior to attending the Frontier School of Arts was performing in a play in elementary school with Misora Kano (Aruru's childhood friend).

Despite not having any experience, she appreciated the arts and was an avid spectator. She used to watch Misora's parents' theater troupe perform all the time, watch TV, and went to the theater.

In later stories, Aruru is revealed to be an orphan, knowing nothing about her origins or her family except for her name which was written in a slip of paper when she was found. She was then raised in an orphanage, and met Misora and her family's theatre troupe, the Blue Sky Theatre Troupe, when they performed for Aruru's orphanage. Aruru then fell in love with acting and wanted to perform on the stage as well, which is why she joined the troupe after that. Her first ever performance after joining the troupe was "The Wonderful Wizard of Oz" where she played as Toto and Misora played the lead role, Dorothy.[5]

Aruru's first meeting with Tsukasa was when Aruru nearly bumped into Tsukasa in the cafeteria.

Aruru looks up to Shizuha as a fellow stage girl, and goes to her for the more technical advice. Aruru first approached Shizuha with an open heart in a way nobody else did. Around Aruru and the others, Shizuha starts becoming more comfortable being herself. Their first meeting meant a lot to Shizuha, who normally feels as though people are intimidated by her.

Aruru first met Lalafin when Shizuha suggested they approach her as they were looking for a student who can do stunts. Because of their love for fun and excitement, Aruru frequently goofs off with Lalafin. When they're not rehearsing for action scenes, Lalafin often joins Aruru in coming up with catchphrases and playing with slime.

Once Aruru has lost sight of her reason to stand on stage, Karen is able to empathize with her feeling that her brilliance is gone by tying it back to her having felt she had lost Hikari. Despite this understanding, Karen also knows that the only way to find her motivation anew is by jumping onto her own stage of destiny, and assures her that she will be waiting for her on stage. The inclination to stand atop the brand new stage Aruru wished for in the beginning is what drives Karen's efforts in Arcana Arcadia.

The Riches of the World Belong to Us

The New Cinderella: Champion of Justice!

Searching for A Four-Leaf Clover

[Star of the day] Aruru Otsuki 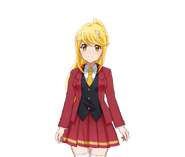 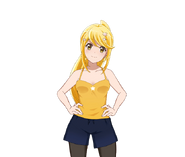 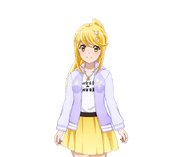 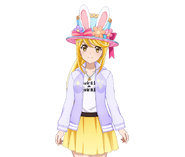 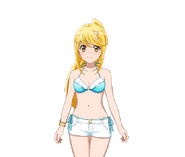 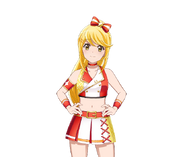 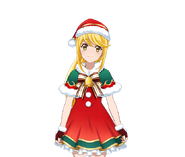 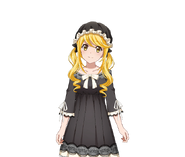 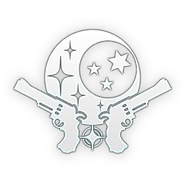