Bunny Egg Hunters: Frontier Island Adventure is an event in Re LIVE. It was the 12th event to take place in the Japanese server, and the 11th in the global server. It was accompanied by the permanent Hoppin'! Easter Bunny Gacha.

Being a limited event, the stage girls and memoirs from the gacha were not added to the reward pool for subsequent gachas.

Misora Kano organizes an egg hunt as a way to thank Shizuha Kocho for her help during a slip up in a recent performance, as well as everything else she does. The rest of Frontier assists her.

Aruru Otsuki comes across Misora Kano eating seriously while struggling over a thank you letter to Shizuha Kocho, unsure of what to say. During their performance the day before, Misora had forgotten one of her lines and Shizuha ad-libbed and covered for her. Misora wants to thank her for that, but while writing the letter realizes there are many other things she wants to thank Shizuha for, and wonders if writing a letter is enough. Aruru says that she understands where she’s coming from, but thinks a letter is a very fitting thank you from Misora, who likes to express appreciation in writing. Misora didn’t realize, and says that she’s in the habit of writing letters from her parents’ acting troupe, which always wrote thank-you letters for people who helped them, and that whenever she wrote letters to people in the troupe she’d get responses and that’s probably why she enjoys it so much. The second years arrive back with a load of bamboo shoots they got from the Oil Painting Course. Lalafin Nonomiya says she’s excited to eat them, and it’s revealed that they had lied to her about bamboo shoots being vegetables, since Lalafin says she doesn’t like vegetables. They talk about other Frontier special events like the Oil Painting Course digging for bamboo shoots to use as reference, and how the Stage Expression Course events are pretty tame by comparison. Shizuha talks about events they had planned to put on for Easter, but says none of them really came together so they were shelved. Aruru, Misora, and Tsukasa Ebisu’s families all didn’t celebrate Easter and are unfamiliar with holiday traditions, while Lalafin and Shizuha’s did. Shizuha talks a bit about the history of Easter traditions, and when asked why she knows so much about history, says it’s mostly things she picked up from video games as a child. Shizuha talks about hiding eggs for her parents as a kid, and Misora suggests they do an egg hunt together, saying they’ll handle preparations since Shizuha is busy with other things. Shizuha tries to offer to help, but Misora stops her, saying they’ll handle it and give her the chance to not be in charge.

Shizuha returns to the dorm one day to find Aruru and Lalafin playing with slime. She asks if it’s related to the egg hunt and they perform their intro for “The Bunny Egg Hunters: Frontier Island Adventure” for her. Their plan is to have Lalafin, Aruru, and Shizuha playing bunnies from Frontier Island while Tsukasa and Misora play adventurers who come to the island. Lalafin, Aruru, and Shizuha will hide the eggs, which contain pieces of paper with writing on them, which Tsukasa and Misora have written that lead to a treasure, meaning that it’s a double sided hunt where one side is searching for the eggs while the other is piecing together the meaning of the papers found within the eggs. Shizuha wonders if they’re okay not being adventurers, since it seems like that would be more their style, but Aruru and Lalafin assure her they’re more excited to get to dress up as rabbits. They all try on bunny ears, and Shizuha is a little embarrassed trying to keep up with the characters Aruru and Lalafin put on as bunnies. She tries to view it as acting and is beginning to get into it, when Tsukasa and Misora arrive and see her. She tries to deflect, but they laugh it off because they knew what she was doing. They plan to do the treasure hunt the next Sunday, and Shizuha wonders what the treasure the eggs hint at will be.

The day of the egg hunt, they get ready to start acting out their adventure. Shizuha suggests improvising a scene where the adventurers arrive on Frontier Island, and then begin the egg hunt. Aruru, Shizuha, and Lalafin will lead the other two to the general area where they hid the eggs (four in total) and they have to search for them. Tsukasa and Misora make it a mini competition to see who can find more of the eggs. At the first area, Misora reminisces about the “Ghost Story Barbecue” they had there, taking turns telling ghost stories while eating off the grill. They find the first two eggs from places familiar to their memories tied there. An hour later, they find all the eggs and set up the pieces of the message, but can’t figure much out with only eight pieces.

The second location is the cafeteria, where they’re only able to find seven of the eight eggs, and decide to take a break for dessert before searching more. Tsukasa thinks about how nobody comments on Misora’s food choice (tonkatsu), and how used to it they’ve gotten now, before commenting on how this is where they did the “Creative Expression Food Court.” They reminisce on it, and it reminds Tsukasa of their performance of “New Cinderella,” and how much of Lalafin’s ideology came through in her lines at the end. They ask if the feeling was the same for Aruru, who says she doesn’t remember so well, and says that she wants to keep going on the stage, but doesn’t need to be at the top of her field, just performing on stage with an audience who is smiling. They manage to find the next egg and Misora wins that round of the competition with Tsukasa, before they head off to the third area.

The third area is the rehearsal room, where they’ll search for eggs using a VR environment they made. The environment is where Tsukasa and Shizuha’s class did a Halloween Theater Cafe, and Tsukasa is horrified to have to see herself in VR. They do a “Will-o’-the-Wisp” performance. Tsukasa is humiliated watching the performance, saying that she’s not doing well, but in her head Misora disagrees, thinking about how well everyone else performs and wondering if she really holds up compared to everyone else. Tsukasa gets them to stop watching the performance and look for the eggs instead, but Misora is distracted, thinking about how good Tsukasa is at acting. Tsukasa laments the mistakes she feels she made in her past performances, but compliments her own passion, and says that she’s always trying her best, and should give herself credit for that. They finish the event, Tsukasa finding seven eggs and Misora finding only one. They try to piece together more of the clue, and when Shizuha comments on not knowing what it is Tsukasa brushes her off, and Shizuha worries she went too far with the Halloween footage.

Their final area is where they performed “Captain Twins,” a place that holds memory for all of them. They talk about Tsukasa and in particular Shizuha’s returns to the stage, and how it was the stage that Aruru and Misora put together that really gave Shizuha the space to shine. Shizuha says that it wasn’t just her, it was all five of them, and it was really thanks to Aruru and Misora. Aruru and Misora correct her though, saying that even if they dragged everybody in, it was Shizuha who knew everyone who would be best for their team and brought them together. Tsukasa talks next, saying that during their first year she saw Shizuha, who was already shining, performing on stage, and that lit the spark inside her to act, finding two eggs that Shizuha doesn’t remember hiding there. Lalafin tells Shizuha that while everyone complimented her jumps/acrobatics during their first year, Shizuha also encouraged her to jump even higher. Misora and Aruru talk about Shizuha’s Pirate Queen soliloquy, and how they admired her and hoped to be able to act like that someday. They have the remaining four eggs, and set up the message for Shizuha, thanking her for everything and declaring her as the treasure of Frontier Island, someone they look up to who guides them. Shizuha realizes the point of the egg hunt was to thank her for everything, because she sounded so happy talking about the egg hunts in her childhood. The eggs were genuinely hidden so that Shizuha wouldn’t catch on, and Tsukasa had to act angry in the rehearsal room to keep her from piecing together the secret message before it was complete. They conclude by giving Shizuha a treasure map that looks like her, and talk about their excitement over adventures to come.

Playing stages allowed the user to obtain Easter lilies, which could then be used to fight event bosses, including the event limited Pink Easter Bird and Green Easter Bird. Event stages had an increased drop rate for Easter lilies.

Defeating event bosses allowed the user to obtain event points to unlock event stories, obtain 3✰ Easter Bunny Lalafin Nonomiya and her corresponding Potential Crystals, as well as Pink Bunny Ears and Green Bunny Ears. These could could be used to purchase items such as the 3✰ An Egg Colored Just Like I Like memoir in the event limited Easter Shop.

Stage girls released for the event allowed the user to inflict greater damage on the event bosses. Damage dealt to each boss was not carried over in subsequent fights, so each boss had to be defeated in a single turn. 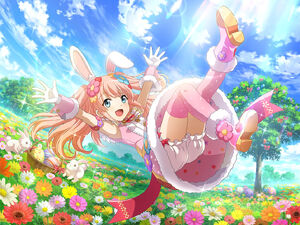 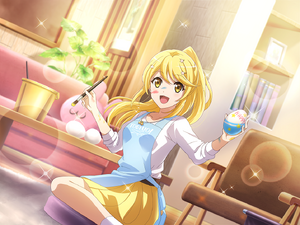 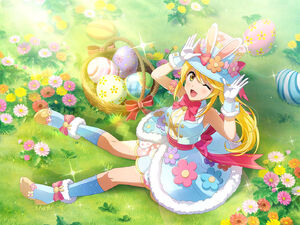 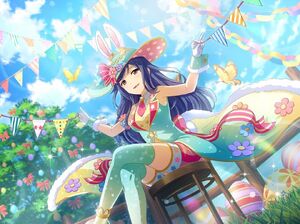 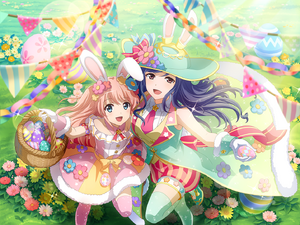 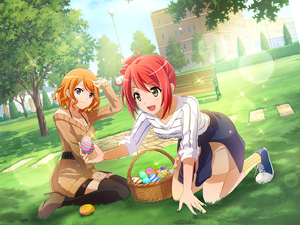 Retrieved from "https://revuestarlight.fandom.com/wiki/Bunny_Egg_Hunters:_Frontier_Island_Adventure?oldid=12231"
Community content is available under CC-BY-SA unless otherwise noted.