Christmas Carol - Blue Storm in the Holy Night is an event in Re LIVE. It was the 37th event to take place in the Japanese server, and 36th in the global one.

It was the first event in the game to introduce the stage girls Koharu Yanagi, Suzu Minase, and Hisame Honami from Seiran General Art Institute. A new permanent Revue Song, BLUE ANTHEM, was added along with the event.

The stage girls of Seiran General Art Institute take part in an exchange program with Mahiru Tsuyuzaki, Maya Tendo, and Nana Daiba at Seisho Music Academy around Christmas time. They rehearse a modified script of A Christmas Carol, and Koharu struggles with opening her heart to her peers as she strives for perfection.

Koharu Yanagi, Hisame Honomi, and Suzu Minase are out together, travelling to Seisho for their exchange program and discussing the holiday season. Suzu is happy to see Mahiru Tsuyuzaki again, and Hisame is excited to see Nana Daiba again. Koharu tells them to be less excited, and use the opportunity to learn from Seisho, but Suzu points out that she’s equally excited to perform alongside Maya Tendo again. Koharu criticizes her use of the nickname Tenten for Maya, and leaves. Hisame makes fun of her for being too excited, and leaves as well, leaving Suzu to catch up with them.

Outside Seisho, Mahiru, Nana, and Maya are waiting for the three Seiran students. Mahiru and Nana talk about how excited they are, both unable to sleep the night before. Maya says she was able to sleep for two hours, and tries to brush this off, but Nana says she’s probably just excited to see Koharu again. Everyone had been looking forward to seeing the Seiran students again, but divided into teams to learn from the different schools, so they won’t be able to meet. Karen Aijo and Hikari Kagura are at Siegfeld, Kaoruko Hanayagi and Futaba Isurugi are at Rinmeikan, and Claudine Saijo and Junna Hoshimi went to Frontier. The Seiran students arrive. Suzu expresses how excited she is to be able to perform with Mahiru again, thanking Santa, and Hisame criticizes her again, but when Nana greets her she’s equally excited. Koharu and Maya have a much more reserved and formal greeting. Suzu tries to move them along quickly, and then tries to get support from Hisame when Koharu gets mad at her, but confuses her words when trying to say hostile.

They meet Masai and Amemiya from Seisho’s class B, who help with production and scriptwriting, who tell them they’ll be performing Charles Dickens’ A Christmas Carol. Suzu is unfamiliar with the story, so they discuss the plot. Suzu is impressed by Seisho’s knowledge of the play, and asks if the other Seiran students knew it, shocked to find out she’s the only one who didn’t know. The roles have all been genderbent and are cast, with Koharu as Emma Scrooge, Suzu as Scrooge’s sister-in-law Isabella Scrooge, Nana as Scarlet Cratchit, Maya as Christmas Past, Mahiru as Christmas Present, and Christmas Yet To Come as Hisame. Koharu thinks about the pressure she feels in advance of a read through of the script, but feels assured that she’ll be able to pull it off.

Koharu wishes the other two Seiran students would carry themselves better during the exchange program, since they’re supposed to be acting as representatives. Maya says it’s best to find the balance between the two, and they begin the read-through. During the read through, Suzu struggles with reading the kanji in the script and has to break character to ask Mahiru, making everyone laugh. Koharu worries the scene is dragging and becomes harsh to end it. Everyone compliments her for it. Hisame finds Koharu in the library after to talk about it, worried because she seemed actually irritated and uncomfortable and tells her she can confide in her, but Koharu critiques her instead, saying she needs to take things more seriously. They argue about it, and Hisame says that Koharu needs to make more effort to communicate with Seisho. Koharu says clashing like this is a waste of time, and Hisame compares her to Scrooge before leaving. Elsewhere, Mahiru shows Suzu around the school and the two reminisce about junior high. While at the stage, Suzu talks about how Seiran students learn about both acting and behind stage activities. Hisame practices singing in the Seisho practice room. When she’s finished, Nana comes in and compliments her singing, saying she was listening outside the whole time. They talk about how far Hisame has come since middle school, and Hisame talks about her struggles with getting through to Koharu.

While rehearsing the next day, Koharu thinks back to what Hisame said the day before, but tries to put it out of her head. She struggles during the scene to keep up with Maya, and they cut because she seems stiff. Maya suggests moving the scene, and tries to ask Koharu what’s bothering her, but Koharu brushes her off. Koharu tries to figure out how to properly portray Scrooge, and decides to do it by acting as somebody she wouldn’t like, but remembers what Hisame said in the library again. Hisame approaches her, because she looks unwell and Hisame also wants to talk about what she said in the library, but Koharu brushes her off again because they’re in rehearsal. After rehearsal, Maya finds her outside school, asking if it’s painful for her to play Scrooge. Koharu takes this as fault, and brushes Maya off as well. Practicing alone at Seiran later, Koharu struggles still to make her character seem alive, pushing herself to the point of tears. Suzu and Hisame come in to see her. Hisame finally says what she’s meant to the whole time properly, that she thinks that Scrooge has a change of heart not because of her past or fear of the future, but because she learns to confide in others, and she feels Koharu has closed herself off from the rest of them. Koharu apologizes, and says she’ll do better. The three Seisho students also arrive to practice more, hoping it will make Koharu feel more at ease and telling her to say more of what she feels.

After the performance, they all meet at Seisho dorm to celebrate. Suzu tries to give a toast, but struggles to be succinct, so Hisame does it. Everyone talks about what they learned or enjoyed about their role. Koharu compliments Seisho’s program, how every girl has her own brilliance but doesn’t cancel out other girls’ brilliance, instead shining stronger together, and says she learned a lot from them. Maya points out the support between the Seiran stage girls, and says she feels the Seisho students learned a lot from Seiran. Nana made everyone from Seiran’s favorite foods, and they all eat together. Seisho and Seiran say their goodbyes. The event ends with the Seiran students walking together, talking about how excited they are for their next stage.

Defeating event bosses allowed the user to obtain event points to unlock event stories, obtain rewards such as 4✰ memoirs Chinatown Delicacies, Harvesting Potatoes, and Take My Hand!, as well as Red Decorations and Blue Decorations. These could be used to purchase items in the event limited shop, including the above memoirs.

Stage Girls and memoirs released for the event allowed the user to inflict greater damage on the event bosses, and increased drop rates for Red Decorations/Blue Decorations. Mahiru Tsuyuzaki, Maya Tendo, and Nana Daiba, who appear in the event story, also had damage bonuses. Damage dealt to each boss was not carried over in subsequent fights if the boss was not defeated in that fight, so each boss had to be defeated in a single turn. 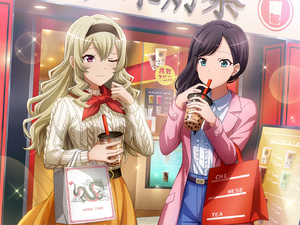 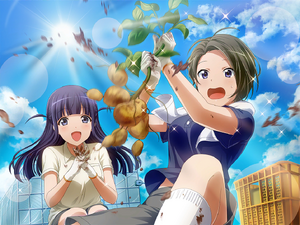 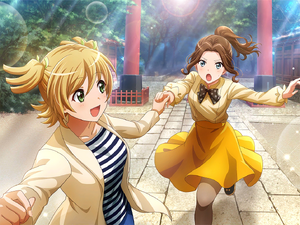 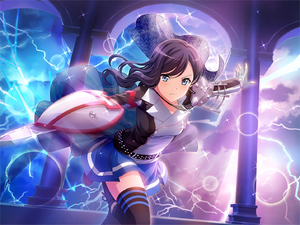 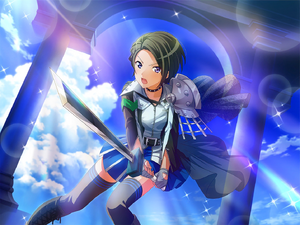 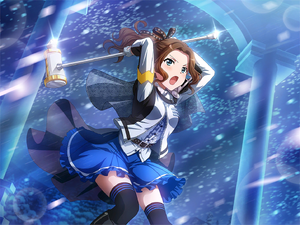 Retrieved from "https://revuestarlight.fandom.com/wiki/Christmas_Carol_-_Blue_Storm_in_the_Holy_Night?oldid=13007"
Community content is available under CC-BY-SA unless otherwise noted.