She is a girl who invites Karen and the rest to the auditions. She does not speak much and her emotions seldom surface. Her whole being is wrapped in mystery. [1]

Sparkling bullets, loaded onto wings and clad in flowers of dreams that have so magnificently bloomed.[intro 1]
A future STAR born in the present. LIVE in tomorrow on the connected stage![intro 2]
Frontier School of Arts Elle Nishino—Aim for Arcadia, to Frontier!

Elle has mint green short hair that reaches her neck. She wears a green hair pin above her left ear. Her eyes are blue.

Elle wears a sleeveless white top, with a navy blue ribbon tied around the collar. The shirt is tucked into a navy blue skirt with white frills underneath, and four gold buttons on the waist. She wears dark see-through leggings and black heels, as well as black flower-patterned gloves on both of her hands.

Elle wears a navy blue short-sleeved dress with white frills. The dress has a white collar and one single white button below the collar. The sleeves of the dress end in white cuffs. She is often seen carrying her mole plush toy, Andrew, across her body from an orange strap like a cross-body bag.

Elle is usually serious and calm, only speaking to deliver requests, orders, and explanations for the stage girls, as well as narrating and addressing the audience. She is respectful to the stage girls, and sometimes admonishes Andrew for disrespectful behavior. When asked about something she has difficulty explaining, she becomes nervous and hesitant.

As a child, Elle is quiet, not great at speaking and a bit of an introvert. She loves stories and books, and loves to write her own stories with her overflowing imagination.

As a future student at Frontier School of Arts, Elle is more self-assured and speaks in a bubbly tone. She has a playful attitude and is not afraid to talk back to her seniors, saying things such as "Oh, what am I gonna do with you?" and "Stop being such a drama queen already!".

The true form of "Elle" is a five year old girl named Elle Nishino. Her parents are often too busy with work to spend time with her, so she buries herself in stories, consuming books, television, and plays. With the knowledge she gains, she writes stories of her own, even though her vocabulary is not big enough to express everything she wants to. One day, her mother bought her a new notebook, which when written in, allows Elle to watch her stories unfold in her dreams. This notebook is nicknamed the "Elle Note". There is an animation in the game that shows the Elle Note being used to create a story, similar to the transformation sequence before Karen Aijo's revue appearances in the anime.

When Elle writes in the Elle Note, the stage girls that are "cast" in her stories are brought into the Re LIVE stage to perform (usually unknowingly). The child Elle witnesses their performances in her dreams, and does not remember the exact details upon waking up. Elle's plush mole, Andrew, appears as a large mascot in the Re LIVE stage. The older Elle that appears on stage is not real—she only exists within the stage, and cannot communicate with the real child Elle.

The stage Elle asked the stage girls to destroy the Elle Note, as it could pose a danger to them. However, they decided not to destroy it, and to encourage the child Elle to write more stories.

When Aruru is running away from the stage, Elle appears as a student from Frontier School of Arts, claiming she exists both in the present on the stage, and in the future. After Revue Frontier is over, Elle reappears as the dream stage Elle, and Andrew remarks that she has "returned". The stage Elle is confused and unaware of what occurred, saying she feels like she was in a dream.

Elle is seen with the mysterious shop owner Andrew The Mole. They lead the underground stage together. Elle occasionally tells off Andrew for being disrespectful or quick to anger when speaking to the stage girls.

The five year old Elle met Maya at a shopping center, where Maya stopped her from falling down the stairs as she chased after her plush mole, Andrew. Elle thought that Maya was just like Mariavera from The Wartime of Farewells, and cast her as such in a story she wrote, leading to the events of Main Story 07: "Maya Tendo" Erased. Maya refers to Elle as "young miss", and treats her very kindly.

Wondering why the stage Elle was so interested in the stage girls, Aruru pulled her onto the stage. After it was revealed that Elle was a five year old girl writing stories, Aruru was insistent that she should keep writing, because she believed in Elle's possibilities and wanted to perform them.

Aruru coins the nickname "Ellelle" (えるる, Eruru) for the stage Elle in order to differentiate her from the child Elle.

When Aruru ran away from the stage, Elle appeared as a Frontier student claiming to exist in the future. Elle said she was born as a stage girl from Aruru's brilliance, and thus Aruru was her mother. She pushed Aruru to return to the stage, since the stage needed her. 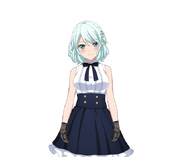 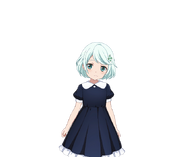 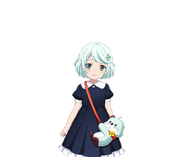 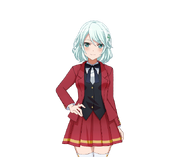