I won't run away anymore.

Whatever goes with ponzu

Reo Kurachi
Fumi Yumeoji (夢大路 文, Yumeōji Fumi) is a character in the Shōjo☆Kageki Revue Starlight franchise, original to Re LIVE. She is a second-year student from the Performance Department at Rinmeikan Girls School.

Formerly a top student at the renowned Siegfeld Institute of Music, holding the position of "Frau Jade", circumstances led Fumi to transfer to Rinmeikan Girls School, intending to leave the stage behind. Everyone agrees she enjoys taking care of others, but she insists that she doesn't. Loves flavoring her food with ponzu [2].

I fled the stage, my heart filled with envy. I stand today on a stage in disarray.
I look back at my old days, and use that strength to create a new stage that will last forever[3].
Rinmeikan Girls School Performance Association - Fumi Yumeoji! To a new life, to a new stage!

Fumi has light-blonde, waist-length, straight hair that curves inwards at the ends. She has a curtain fringe that is parted above her left eye and swept right, where she wears a hair pin in the shape of a red rose with a wing that is a match to Shiori's. She wears a red rose hair pin on the right side of her bangs. Her eyes are a bright teal.

School Uniform
The Rinmeikan students wear a sailor-style uniform, described by herself as being quite retro. It consists of a waist-length black blouse has a white sailor collar decorated with a single black stripe, matching the cuffs of the bishop-style sleeves, and a chest flap in the same color of the uniform that is conversely decorated with a single white stripe. A red ribbon is worn as the traditional ornamental tie. The blouse is worn over a knife-pleated pinafore dress in black that is decorated with two golden buttons placed horizontally along its waist, making them visible through the front opening of the blouse. Fumi wears her uniform with black mid-calf socks and brown loafers.

Casual Outfit
Fumi wears a plain white shirt with a black accent on the neckline, tucked into dark blue pants which she wears with a white belt. She wears a pastel green blazer, and a gold necklace and brown hairband as accessories.

Practice Outfit
Fumi's practice outfit consists of a pastel green leotard with sleeves above the elbow. Underneath it, she wears white tights.

Revue Outfit
Fumi's revue outfit consists of a mini kimono that fades from a lighter to a darker tone of lime green, which she wears with her left arm outside of the sleeve. The collar of the kimono has golden piping and a black lace han eri, and the sleeves and bottom hem have a gold band in an over-under pattern. The kimono has a front opening which shows a white skirt with box pleats and a gold band, underneath which she wears a black petticoat. She wears an imperial purple obi with golden piping on top and a bottom slit down the front, over which she wears a thick red ribbon which ties as a bow in the back and an obi-shime consisting of two gold chains with an obi-dome in the shape of a golden three-petal flower. She wears black over-the-knee boots resembling jika-tabi with a golden trim and heels, with bright red ribbons tied around the ankles and knees, and dark brown thigh-high stockings underneath. Fumi wears a red spaulder with gold edges and red tassels, tied to her arm with a red ribbon and over her shoulder with a golden string, and a black cuirass with golden edges, tied to the back of her neck with a black ribbon.. Her arms are wrapped in white bandages over which she wears black fingerless gloves.

Fumi is described to be a strong and tough girl who is often serious, though she is sometimes offensive. In contrast to her younger sister. she can struggle to express herself off-stage, and often gets riled up when teased by others, especially Ichie.

Fumi is hardworking and often leads the rehearsals with the other Rinmeikan stage girls. She is uncompromising and pushes the other stage girls to be better, but her actions come from a desire to see them shine on stage.[4]

Fumi is the type of person who wants to achieve things by her own strength, rarely asking for help. She will not accept a win if she knows it's undeserved and will always strive to be better through hard work. In contrast to this, Fumi is a caring person and even if she won't admit it, she worries about her friends. Her tendency to nitpick at things and her general abilities in everything that has to do with daily life, make her seem like a "mom friend".

Since childhood, Fumi loved plays and musicals, often acting like she was in them with Shiori for fun.[5] Eventually, Fumi and Shiori promised to become Frau Platin and Saphir, respectively, and perform in Elysion together.[6] Since Shiori was often sick, Fumi would fuss over her and take care of her.[7] Fumi attended Siegfeld Institute of Music since at least her first year of high school. She played the role of Orpheus at Siegfeld "a long time ago," a performance for which Yachiyo was in attendance.[8] There she earned the title of “Frau Jade.”

However, in her second year, she was one-upped by Akira Yukishiro and was unable to rank higher and become “Frau Platin.”[9] In Downfall Part 2-2, Fumi uses the story of a knight to recount her departure from Siegfeld.[10] Fumi tells that at one point, the knight was unparalleled in skill and seen as a possible successor to the king by many, including himself. As a result, the knight became more arrogant. Then one day, many started saying the knight's once sickly younger brother would surpass him, which frightened the knight and caused his abilities to waver. Fumi claims that, besides his younger brother, other knights "rejoiced at his despair." However, this does not seem to be completely true as it applies to Fumi--Akira respected Fumi while she was struggling[11], and Michiru still considers Fumi on par with Akira and a former friend[9]. Eventually, the knight "prayed that his brother fall to an enemy's arrow" and realized how weak he had become, causing him to flee the kingdom. She decided she couldn’t stay at Siegfeld any longer and would abandon being a Stage Girl, transferring to Rinmeikan at her parents’ suggestion.[5]

Fumi's younger sister. In their youth, she helped take care of Shiori due to her physical illness, and the two shared their love of the stage and dream to perform Elysion together. Shiori followed Fumi into enrolling at Siegfeld's junior high, and after Fumi's first year in Siegfeld's high school, Fumi gradually became more distant with Shiori before transferring schools and fully cutting off contact. Shiori greatly respects Fumi as a Stage Girl, and is heartbroken and burdened by Fumi’s sudden and unresolved disappearance, secretly harboring a desire for Fumi to return to Siegfeld so they can fulfill their dream together.

The two reconnect During Zeus' Decision, but Fumi struggles to reach out to Shiori properly until Venus & Cupid - Angelic Thread of Love, when Yachiyo pushes her to watch a performance of Shiori's. During the event, Fumi expresses how proud she is of Shiori's performance, and apologizes for not reaching out to her first.

Tamao is the first to convince Fumi to join and participate in the Performance Department as she needs to protect it from being closed down. Although Tamao doesn't expect Fumi to join the Performance Department, Fumi is impressed with her resilience and transfers in. Fumi says that Tamao's dedication to the stage is what made her a Stage Girl again. She makes Tamao a meal made with ponzu as a gift on White Day as a respect.

Although very annoyed with Ichie, Fumi is impressed and touched by Ichie's determination to recruit her to Rinmeikan Performance Department. Ichie is the reason why Fumi decides to once again perform in bigger stage. The two banter frequently, and Fumi is often victim to Ichie's pranks.

Before moving to Rinmeikan, Fumi and Akira studied together at Siegfeld as first years. Like Akira, Fumi is very strict and has a very serious attitude. Akira had high expectations of Fumi, and considered her an equal. However, after a disastrous performance in the final exam of the first year, Fumi suffered serious trauma and decided to quit performing. Akira admits to Shiori in Main Story 8 Part 3 that she regrets her fault of not being able to keep Fumi in the school.

The two meet again during the Stranded Stage Girls event, where they fight because of Akira's lack of trust in Fumi. Akira acknowledges that she knew about Fumi's suffering during her time as an Edel, but says she was unable to overcome her role as Frau Platin to reach out and help her properly. After the fight, Akira congratulates Fumi on returning to the stage.

Michiru and Fumi attended Siegfeld together in their first year.[12] When Fumi quit Siegfeld shortly after Akira became Frau Platin in their second year, Michiru confronts her and correctly predicts that Fumi's time as a Stage Girl is not over yet. Michiru claims that the two of them were friends, although Fumi denies this. Fumi is annoyed by Michiru's constant scheming and sneakiness, and she claims that they weren't friends during their time at Siegfeld. She saw Michiru's dedication to Akira as un-Stage Girl-like and saw their partnership as part of why she could not become Frau Platin. However, she ends up feeling comfortable enough with Michiru to confide in her about her true feelings of failure and guilt.[9]

Intruder in the Girls' Changing Room!?

Moment of Relaxation on a Trip

Cherry Blossoms in the Bento

[Star of the day] Fumi Yumeoji 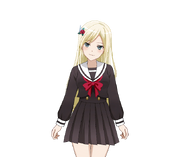 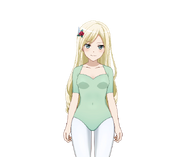 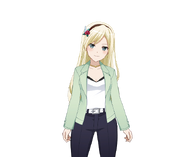 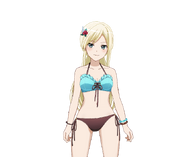 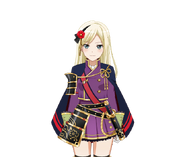 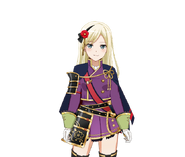 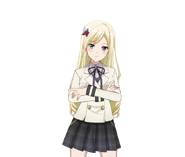 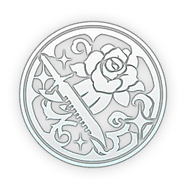