Karen's childhood friend. A born performer who studied at an acting school in England. Her fate has been linked with Karen's since viewing a performance of "Starlight". Reuniting with her old friend, she is driven by a strong desire to join the mysterious Revue.[2]

(From Episode 8 of the anime)

The vow from that day slipped from a hand held confidently aloft, falling into the abyss.
Though it may end in tragedy, I will once again ascend the stage of fate.
99th Class, Hikari Kagura! All of this... is for the sake of Starlight!

Hikari has cerulean blue eyes and long, straight black hair. Her hair goes below her waist and is generally styled loose, with bangs covering her forehead. She always wears a twin star hairpin, gifted to her by Karen, on the right side of her bangs.

School Uniform
Her Seisho uniform consists of a gray blazer with dark gray trimming and a gray knife-pleated skirt, a white button-up shirt, a red ribbon tie, and brown loafers, which she wears with semi-sheer black tights.

Casual Outfit
Her casual outfit consists of a plain white knee-length sundress with bell sleeves and a deep V-neck with blue hems, under which she wears a plain blue top, and blue ballerina flats.

Practice Outfit
Hikari wears a purple leotard that has a sheer collar with a design resembling a flower petal. Underneath it, she wears white tights.

Revue Outfit
Her revue outfit comprises a deep blue jacket with golden facing and piping, a standing-type collar with a golden tassel at the joint, white turnbacks with golden piping, red cuff flaps with golden trim, and double golden armbands and epaulets. Her belt is golden with a silver buckle identical to Karen's. Her skirt is a blue knife-pleated skirt with a white band near the bottom, a blue ribbon at the back, and a light blue tulle dress tail. Like all the other girls, she wears black boots with golden trim detailing and a tassel, as well as a pelisse jacket with golden piping, held to a red shoulder belt by a golden aiguillette and a golden button. Unlike the rest of the girls, though, she has a blue jacket, and it goes over her right shoulder. Her star clip becomes a diadem in her revue outfit. Additionally, she wears an accessory in the shape of Mr. White near her belt. Her weapon is a rope dagger with a blue gem at the base of the blade.

During her childhood and stay in England, Hikari was an ambitious and outgoing theater student. She was passionate for performing on stage and eager to make good on her promise to Karen, thus she constantly pushed herself to be the best and handily fought through most of the revues in her school.

However, her defeat in the revue auditions resulted in her losing her brilliance and passion for performing. She became a husk of her former self, mindlessly attending classes and going about her routine without any real purpose. Upon reflecting on it, she managed to remember her promise to Karen and reclaimed some of her lost brilliance, a feat that suprised even the Giraffe. The tolls of the revues had a lasting impact on Hikari, even with the brilliance she reclaimed. She remains aloof, generally appearing uninterested in most things and people if they aren't related to Karen, Mahiru, theater, jellyfish, or Mr. White. When it comes to interacting with Karen, however, she regularly breaks her stoicism and shows some shades of her previous persona.

Initially born and raised in Japan, Hikari and Karen were childhood friends up until Hikari's departure to study in England in order to hone her theater skills and fulfill the promise they made to perform together. For 12 years she studied abroad in the Royal Academy of Theatrical Actors, receiving updates from Karen through letters.

During her final year at the Academy, she participated in revue auditions similar to the ones she would later join in Seisho and quickly rose through the rankings. However, she was ultimately defeated by Judy Knightley, the ace of her class, which resulted in her losing her brilliance in order to fuel the winner's stage of destiny.

Having forgotten about her passion for acting, and following a disastrous performance where she completely froze up, Hikari remembered her promise to Karen and confronted the Giraffe, who offered her the unique opportunity of participating in the upcoming revue auditions in Japan despite what little brilliance she had left.

Karen is Hikari's childhood friend with whom she made a promise to stand together on the stage of "Starlight" someday. This promise drove her to study in the Royal Academy of Theatrical Actors, the most renowned theatre school in the world. During her 12 years in London, she always received letters for Karen, but made a choice to push her away because she feared her desire to see her would come out stronger than her efforts towards the stage, which were ultimately to see her again under the spotlight. It is her love for Karen, and her trust in the value their promise, that gives her the will to ask the Giraffe to participate in the revue auditions that would eventually take place in Seisho, even after she'd lost her brilliance from being defeated at the auditions in London.

Mahiru is initially reluctant about letting Hikari room with her and Karen, and feels mounting jealousy towards the way her return has affected Karen. Hikari, however, appears indifferent to Mahiru's negative feelings, and agrees with Karen's assessment about the brilliance and warmth that make her shine. Eventually, Mahiru also becomes somebody Hikari can rely on, with the less serious sides of her also showing up when they're together.

Hikari respects Maya as her peer, and while they have differences in their interpretation of the role of Claire, they can come together in their love of said character and their understanding of each other's passion towards the stage.

Visit the Shrine in Kimono

[Star of the day] Hikari Kagura 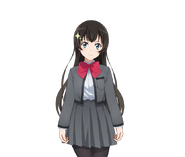 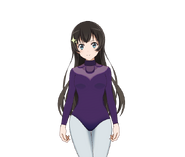 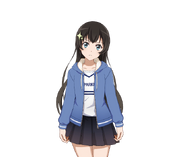 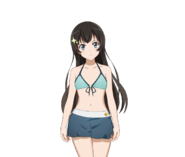 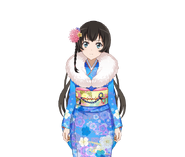 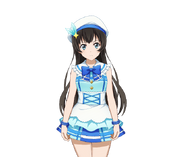 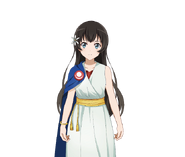 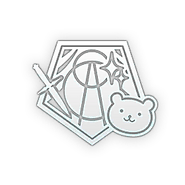