I'm going to sing and dance to my heart's content!

Azumi Waki
Ichie Otonashi (音無 いちえ, Otonashi Ichie) is a character in the Shōjo☆Kageki Revue Starlight franchise, original to Re LIVE. She is a second-year student from the Performance Department at Rinmeikan Girls School.

Her last name literally means "silent", but she's a rowdy little troublemaker. Not exactly a deep thinker, but her forthrightness draws in those around her. In junior high, she wanted to be an idol singer, and so she's confident in her dancing and singing abilities. Enjoys her daily verbal sparring with Fumi.[2]

The fantastic stage I sought so hard is in danger!
Now's the time for a comeback! It's now or never! To a beautiful stage!
Rinmeikan Performance Association - Ichie Otonashi! Listen to the sound of my soul!

Ichie has lilac hair that is styled in layers and goes just below her waist, as well as a layered fringe that is swept left. She has bright yellow eyes.

School Uniform
The Rinmeikan students wear a sailor-style uniform, described by Fumi as being quite retro. It consists of a waist-length black blouse has a white sailor collar decorated with a single black stripe, matching the cuffs of the bishop-style sleeves, and a chest flap in the same color of the uniform that is conversely decorated with a single white stripe. A red ribbon is worn as the traditional ornamental tie. The blouse is worn over a knife-pleated pinafore dress in black that is decorated with two golden buttons placed horizontally along its waist, making them visible through the front opening of the blouse. Ichie wears her uniform with solid black thigh-high stockings and black loafers.

Casual Outfit
Ichie wears a pastel pink knitted sweater with three quarter sleeves and a pleated skirt that fades from beige at the top to white at the bottom. The skirt has a pink bow that is laced up the right side. She wears a brown braided bracelet on her right wrist and a golden necklace with a bow.

Practice Outfit
Ichie wears a sleveless leotard dress that fades from white at the top to pink at the bottom, underneath which she wears white tights. The leotard has a pink lace neckline.

Revue Outfit
Ichie's revue outfit consists of a mini kimono that fades from a lighter to a darker tone of pink. The collar has golden piping and a black lace han eri, and the sleeves and bottom hem have a gold band in an over-under pattern. The kimono has an opening over her right leg, which shows a white skirt with box pleats, gathered ruffles, and a gold band. She wears an imperial purple obi with golden piping on top and a bottom slit down the front, over which she wears a thick red ribbon which ties as a bow in the back and an obi-shime consisting of two golden strings tied in a bow at the front. She wears black over-the-knee boots resembling jika-tabi with a golden trim and heels, with bright red ribbons tied around the ankles and knees. Ichie wears a red spaulder with gold edges and red tassels, tied to her arm with a red ribbon and over her shoulder with a golden string, and tsumami kanzashi depicting pink flowers on her hair.

Ichie is very rowdy and a troublemaker, pulling pranks on pretty much everyone she can, especially Fumi. However, she pulls many of her pranks in order to get people to smile or to help people out, even if she often ends up angering her targets instead.[3] In addition, she can be serious when needed, such as when she takes on the responsibility of training former Performance Department students to be extras in "Shinsengumi" in addition to practicing for her own role.[4]

Ichie is a very emotion-based person, both in how she acts and how she looks at others. In regards to her own actions, Ichie says that she likes to "rush into things all excited" instead of planning ahead[5], and Fumi compliments Ichie's portrayal of Diaochan for being "full of emotions" and "relatable."[6] In regards to how she looks at others, Ichie is noted to be very perceptive and aware of others' emotions,[7] which she attributes to her time in the idol industry.[8] One example of this is when she's orchestrating pranks for her castmates in Yua Shinohara Bond Story Chapter 1, where she accurately judges which of her castmates will not get mad at her and analyzes the effects her pranks have.

Ichie shows a lot of concern for the people around her. Before coming to Rinmeikan, she would often argue with her idol group's management because she felt that she and her group members weren't being treated fairly.[9] During rehearsals for Play A, instead of aiming for the Unknown Lead herself, Ichie worries about the pressure Tamao is under, Fumi's unresolved issues from the past, and the future Rinmeikan that Rui and Yuyuko will inherit.[10] Due to her awareness of others, Ichie sometimes restrains herself, such as when she says that she should stay more in the background out of respect to everyone else during "First Brilliance of the Year - Takamagahara Priestesses" before Claudine corrects her.[11]

When she was younger, Ichie often moved due to her parents' work. Throughout her life, she has tried participating in many different forms of entertainment.[12] Before coming to Rinmeikan, Ichie was an idol in a 110-people group called Sweet Pleats. While she enjoyed being an idol, she was often angry with her group's managing team due to their laziness and focus on profit. Eventually, Sweet Pleats disbanded, but not too long before it did, Ichie saw another idol watching a recording of the play Rinmeiki, which was a well-known play in Rinmeikan's tradition. The fact that every actor in Rinmeiki was able to shine equally inspired Ichie to attend Rinmeikan, though she found out that Rinmeiki was not performed there anymore.[13]

While Ichie does get on Fumi's nerves sometimes, it is clear that they care about each other. They banter frequently, especially since Ichie knows how to get on Fumi's good side. In her Tsu the Crane bond story, Fumi talks to her about her family.

Ichie and Tamao became classmates when they started at Rinmeikan and they have been good friends ever since. In the Ghost Patrol Squad Deputy's story, Tamao sets aside time to help Ichie out with her homework. Similarly, Tamao has pointed out that looking at Ichie eat so heartily always gives her an appetite.

Despite her penchant for playing pranks, Ichie cares deeply about the rest of the girls, and Tamao is no exception. She can instantly tell when Tamao's upset and lightens her mood. Whenever Tamao overworks herself, Ichie reminds her to relax and take a break. In preparations for their play with Kiryuin-sensei, Ichie helps Tamao get into her role[14] by doing chores for her and treating her like a 'princess'. Sitting around and letting others do the work is apparently a challenge for Tamao.

Like Tamao, Ichie shares a close bond with Yuyuko. Sometimes they spend time singing karaoke together, as seen in one memoir. In one of Yuyuko's menu screen lines, she says that she doesn't need to treat Ichie in any special way just because she's older, and she adds that it's a good thing.

Ichie is also very fond of Rui as well. The first time they met was when Rui was new to Rinmeikan and Ichie helped take her to Tamao's classroom. While Fumi was still working in her old job, Rui accompanied Ichie at the café. Of course, not even Rui can be an exception to Ichie's pranks. In her Winged Tengu bond story, Ichie replaces Rui's photo of Tamao on her notebook with a photo of herself instead, much to Rui's embarrassment.

The Idol of the Room

Intruder in the Girls' Changing Room!?

Keepers of the Peace

Naughty Ninja on the Run!

Solo Show Under the Cherry Blossoms!

Dance for the Gods

[Star of the day] Ichie Otonashi 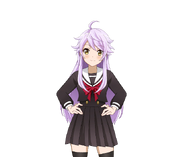 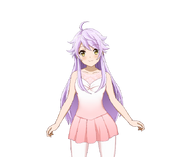 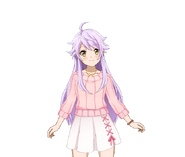 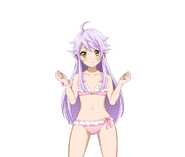 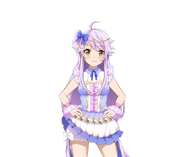 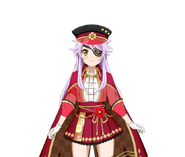 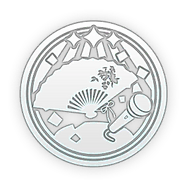