I'll have you follow me till the very end!

Revue of Promise
Revue of Annihilation
Revue of Resentment

Granddaughter of the head of a traditional Japanese dance school, this Stage Girl has refined skills in traditional song and dance. Raised in privilege, she is all too reliant on Futaba Isurugi. While she is always smiling, she is more calculating than anyone else. Speaks in the elegant Kyoto dialect [2].

(From the anime, with Futaba Isurugi)

There is a path we two have walked, one that goes between song and dance...
Yet I have found a straight path, one that rises to the night sky!
99th Class, Futaba Isurugi! I will dash forth with fighting spirit!

99th Class, Kaoruko Hanayagi! I'll have you follow me till the very end!

Kaoruko has shoulder-length cerulean-blue hair that she generally wears loose and curled in two even sections over her shoulders with bangs that are parted to the right side with a blunt cut. She has warm gray eyes.

School Uniform
Her Seisho uniform consists of a gray blazer with dark-gray trimming and a gray knife-pleated skirt, a white button-up shirt, a red ribbon tie, and brown loafers, which she wears with black knee-high socks.

Casual Outfit
Her casual outfit consists of a black T-shirt with short sleeves with a white band on them. Over it, she wears a dark-green sleeveless top, which matches her dark-green skirt with two red bands near the bottom. Additionally, she wears a top-knot red headband, and she finishes this ensemble with black combat boots. While in the dorms, she wears an eggplant-colored dress and a short pale-yellow jacket.

Practice Outfit
Kaoruko's practice outfit consists of a black leotard with grey leggings. She wear a white crop top over it.

Revue Outfit
Her revue outfit comprises of a red-violet jacket with golden piping, a standing-type collar with a golden tassel at the joint, pale-yellow turnbacks with golden piping and detailing, pale-yellow cuff flaps with a golden trim, and a golden armband, aiguillettes, and epaulettes over a plain-white button-up shirt with a ruffle collar. Her belt is golden with a golden buckle identical to Futaba's. Her skirt is a very-pale-pink knife-pleated skirt with a purple-pink band near the bottom, a purple-pink ribbon at the back, and a light-blue tulle dress tail. Like all the other girls, she wears black boots with golden trim detailing and a tassel, as well as a red pelisse jacket with golden piping over her left shoulder, held to a red shoulder belt by a golden aiguillette and a golden button. Her weapon is a naginata with an amethyst-colored gem between its collar and spacer.

Upon meeting people, Kaoruko tends to be shy, hiding behind Futaba when possible.[3] Once she becomes comfortable with people, she exhibits a mischievous side and enjoys teasing people when she can. When others tease her, however, she lashes out or refuses to acknowledge it. Around people who she feels understand her, she shows a more vulnerable side and opens up about parts of her that she ordinarily wouldn't.[4]

Due to her upbringing, Kaoruko is highly knowledgeable in many different aspects of traditional Japanese culture, especially traditional Japanese dance, and she is very proud of her abilities. She is also ambitious, as she desires to become the best dancer in the world.[5] She tends to be lazy and inconsiderate, often asking Futaba to do menial labor for her or buy her things when she doesn't want to. At her worst, this results in Kaoruko letting her work ethic go. When Kaoruko does remember her goals, she can work intensely, sometimes to the point of not being able to focus on anyone or anything else.[6]

Kaoruko is the granddaughter of the head of the Senka-ryu school, a famous traditional Japanese dance school run by her family. She has been trained in not only Japanese dance but numerous other traditional Japanese arts, as well as English, since a young age in preparation to someday succeed her grandmother as the head of the school. However, she often felt greatly burdened by her responsibilities, and she would frequently run away from home, requiring Futaba to chase after her and bring her back. Every year, Kaoruko would participate in a competition for the best dancer in Japan held among all the traditional Japanese schools, and she would always win.[7]

Future
2020: Expected to succeed the Senka-ryu School of Japanese Dance as the 20th Head "Suisen Hanayagi"

Kaoruko and Futaba are both childhood friends and often Futaba has to play to make fun for Kaoruko. Kaoruko, nonetheless, is dependent on Futaba and she understands that without Futaba, she will never be able to achieve to what she has now. Thus, while Futaba and Kaoruko used to have tensions somehow, they also share a complicated, unique and strong relationship.

Every new year, Tamao and Kaoruko would take part in a nationwide competition to determine the best dancer, where Kaoruko would always win and Tamao would always come in second.[8] Tamao also occasionally studied dance under Kaoruko's grandmother.[9] When the auditions first start, Tamao is so intimidated by Kaoruko's skills that she begs Kaoruko to drop out of the auditions.[10] Kaoruko's harsh refusal to drop out makes Tamao more determined to save the Rinmeikan Performance Department.[11] At the beginning of Performance Festival rehearsals, Tamao declares war on Kaoruko, which fuels both of them to work harder.[12]

Kaoruko never hesitates to point out Tamao's weaknesses, often doing so in a blunt and direct way. At first, Kaoruko is frustrated by Tamao's self-sacrificing tendencies and lack of determination, and she considers it insulting that someone who learned from her family's school of dance is so weak.[13] However, when they fight against each other in the Revue of Canis Major, she acknowledges that Tamao has become more determined[14], and from then on she feels pressure to stay ahead of Tamao in performing[15]. It's implied that Kaoruko tries to keep up with Tamao's doings in the Rinmeikan Performance Association, although she denies this when asked about it.[16]

A Gift for Someone Precious

You Haven't Changed a Bit

Knights of Friendship and Sorrow

Halloween Through the Glass

[Star of the day] Kaoruko Hanayagi

Revue of Wisdom and Attachment

Revue of High Priestess and Devil

[Star of the day] Futaba & Kaoruko 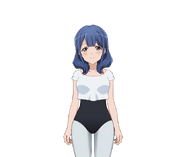 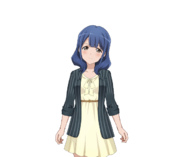 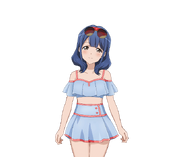 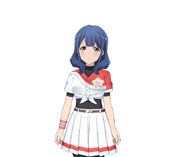 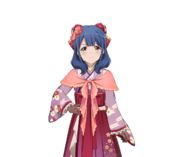 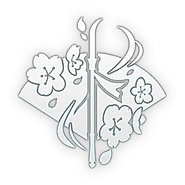