We will all do Starlight!

Lazing about
Baths after practice

She set out on the road to becoming a Stage Girl after being captivated by a performance of "Starlight" she saw as a child. She is always boisterous and cheerful, but hates early morning lessons. She joins the mysterious Revue with Hikari Kagura, who crossed fates with her when they were young girls.[2]

(From the anime, game, stage plays)

Atop a stage brimming with stardust, clad in flowers of love that have so magnificently bloomed.
I have been reborn and jump onto the dazzling stage.
99th Class — Karen Aijo! We will all do Starlight!

Karen has red ochre eyes and auburn hair that goes down to the nape of her neck. It is generally styled in half-twintails, with her bangs swept to the right side. As an essential part of her outfit, she always wears a crown clip, gifted to her by Hikari Kagura, on the left side of her bangs.

School Uniform
Her Seisho uniform consists of a gray blazer with dark gray trimming and a gray knife-pleated skirt, a white button-up shirt, a red ribbon tie, and brown loafers, which she wears with black three-quarter socks.

Casual Outfit
Her casual outfit consists of denim shorts, a plain white T-shirt with red hems, beige high-top sneakers, and a pale pink jacket with red trimming tied around her waist. She wears a pale pink T-shirt with a red fish print, a pale yellow short-sleeved hoodie, and orange shorts around the dorm.

Practice Outfit
Karen's practice outfit consists of a black leotard with red straps, which she wears with white tights. Over the leotard, she wears a loose white shirt that goes down to her waist.

Revue Outfit
Her revue outfit comprises a blue jacket with golden facing and piping, a standing-type collar with a golden tassel at the joint, red turnbacks with golden piping, white cuff flaps with golden trim, and a golden armband and epaulets over a plain white shirt. Her belt is golden with a silver buckle identical to Hikari's. Her skirt is a red kick-pleated skirt with a white band near the bottom, a red ribbon at the back, and a white tulle dress tail. Like all the other girls, she wears black boots with golden trim detailing and a tassel, as well as a red pelisse jacket with golden piping over her left shoulder, held to a white shoulder belt by a golden aiguillette and a golden button. Her crown clip becomes a real crown in her revue outfit. Her weapon is a spadroon with a red gem at the hilt.

Karen has an enthusiastic and warm nature, which makes her strive to befriend her fellow stage girls, rather than compete with them. While she might appear to be carefree and to slack off when it comes to school, Hikari's arrival restores her motivation to pour her efforts into her training, proving soon enough that her ability exceeds expectations. Her stubborn determination proves to be a valuable tool in the revue auditions.

Karen grew up in Tokyo, and meeting Hikari led her to meet the stage when they saw the performance of "Starlight" that would shape their future. They vowed to stand together on stage as stars someday, and in order to do that, Karen trained in various disciplines related to theater and participated in stage plays since childhood. Eventually, she decided to go to Seisho, considering it to be the most difficult school where she could challenge herself in pursuit of her dreams.[3]

Hikari is Karen's childhood friend with whom she made a promise to stand together on the stage of "Starlight" someday. Being the person who drove her life goals, her departure for 12 years made her lose motivation, which was renewed once Hikari transferred into Seisho. It is her love for her, and her trust in the value their promise, that gives her the will to jump into the revue auditions and eventually challenge the underground theater in order to have Hikari return.

Mahiru is Karen's roommate at Seisho. Upon entering the school and seeing everyone's talents, Mahiru had lost confidence in herself; instead, she looked up to Karen as a shining star, and found comfort in being able to take care of Karen when she depended on her. Hikari's return, and Karen's subsequent increased efforts, made Mahiru jealous that Karen was no longer looking at her or relying on her. However, Karen's reassurance that she has her own brilliance and a warmth that would make anyone smile encourage her to remember what initially drove her to attend Seisho. Eventually, she becomes friends with Hikari and Karen both, once again being somebody they rely on.

Junna has a long-standing fear of failure, due to not considering herself to be naturally talented and having started out in performance arts comparatively late in life. When they come head to head in the revue auditions, Karen assuages her fears that losing once would hinder her ability to stand on stage again, as the nature of theater itself is that actors are reborn with every new performance. After that, they become friends, with Karen giving Junna the nickname "Junjun."

Karen is deeply appreciative of Nana's efforts to help everyone out, and is the one to give her the nickname "Banana," as she considers her to have the sweet, kind, and nourishing qualities of one. Karen's view that the ephemeral nature of theater is what makes each performance worth treasuring directly opposes her wish to grasp onto her beloved performance of "Starlight" during the 99th Seisho Festival. While after her loss Nana has trouble coming to terms with the idea, she is still cares for and is supportive of Karen as they move towards a 100th Seisho Festival without Hikari.

Once Aruru has lost sight of her reason to stand on stage, Karen is able to empathize with her feeling that her brilliance is gone by tying it back to her having felt she had lost Hikari. Despite this understanding, Karen also knows that the only way to find her motivation anew is by jumping onto her own stage of destiny, and assures her that she will be waiting for her on stage. The inclination to stand atop the brand new stage Aruru wished for in the beginning is what drives her efforts in Arcana Arcadia.

Just the Thing After Practice

Trying Out the Mask

Arthur, King of the Prop Room!?

Until the Others Arrive

Searching for A Four-Leaf Clover

Back to the Renaissance 2019

[Star of the day] Karen Aijo 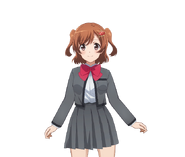 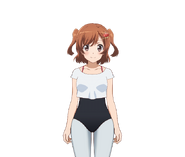 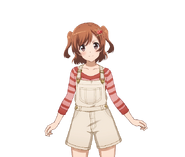 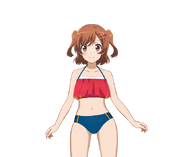 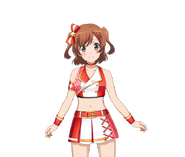 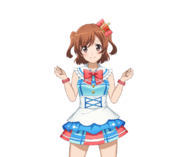 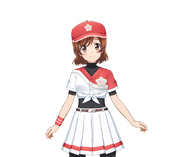 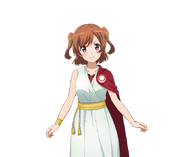 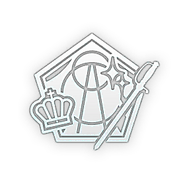