I'll show you that we also have a chance!

In the calm before the storm, the blue flame stirs and pulses.
Seiran General Art Institute Stage Department Performance Major—Koharu Yanagi!
I will raise a storm again today!

Koharu has chest length dark brownish-purple hair that is pushed all to her right side over her shoulder. She has turquoise eyes.

Koharu’s school uniform consists of a plaid blazer of red, blue, and purple stripes. There are two buttons that close the blazer at the stomach. The Seiran school emblem is on the right breast of the blazer. Underneath the blazer she wears a white button-up shirt with a black tie. Her skirt is a plain brown one. She wears knee-high black socks and black flats.

Koharu’s practice/casual outfit consists of a hoodie, shirt, and shorts. The hoodie is black and blue. The main body of it is blue with the hood and sleeves being black. She wears it zipped up to just above her chest. The sleeves have three blue stripes toward the shoulders and the cuffs are blue too. On the left shoulder, it bears the Seiran school symbol as well as letters spelling out "Seiran" going down the sleeve. The shirt is a white t-shirt. The shorts are just plain black shorts.

Koharu’s revue outfit consists of a black and white long sleeved shirt with a collar. The middle of the shirt is white while the rest is black. The sleeves have the underside as white and the rest as black. On her right breast there is a zipper. She wears a black belt around her waist over the shirt. She wears a blue skirt with a sparkly textured stripe. Hanging off the skirt is a pale brown cloth that goes to knee length. She wears slightly above the knee stockings of black with three blue stripes on the top. She also wears knee-high black boots with a single sparkly grey stripe at the top. she wears light blue fingerless gloves that also expose the top of the hand. She wears a metal plate around her right shoulder that has small strips hanging off of it. It is attached to her by a rope around her neck. She wears long black earrings with white dots.

Strict and serious, Koharu acts as the Leader of Seiran’s Stage Department. She is incredibly capable when it comes to performing, but struggles when it comes to other things or assignments that aren’t immediately clear to her.[5]

She often feels that speaking lowers the mood of the room she’s in, but has found, in Hisame and Suzu, people who will still be willing to face her even if she speaks honestly.[6] However, she is still learning this, and still struggles on her own, often trying to solve problems without involving or relying on others.[7]

As class leader, she feels a burden to represent Seiran and leave a good impression when interacting with the other schools, though this causes her to struggle with balancing the stage alongside other things (usually interpersonal relationships).

Initially appearing stoic or emotionless, Koharu is deeply concerned with those around her. She wants to connect with her fellow stage girls, and worries internally about the way she phrases things being misunderstood or viewed with crueler intentions than she means.[8]. She is also deeply affected by the comments of others, becoming preoccupied with Hisame comparing her to Emma Scrooge in their performance of A Christmas Carol.

Her serious attitude also causes her to respond with difficulty to stage girls with freer perspectives, becoming flustered with unexpected ad-libs.[9] Hisame describes her as serious but wishes for her to be more aloof, implying a desire for Koharu to put more distance between herself and her feelings.[10]

Koharu participated in The 52nd Theater Alliance Recital,[11] as part of a different class than Maya Tendo. Because of her habit of participating in rehearsals from the back, and her attempts to explain her reasoning, she felt others become distant from her. To protect herself from this, she threw herself fully into rehearsing and training, so she could still create captivating stages even if she was performing alone, although she dislikes this style of performing.[12]

In BLUE GLITTER, Koharu’s dislike for chocolate and Valentines Day is revealed to stem from a prior experience, where she made homemade chocolates for someone that were brushed aside, resulting in her crying when she returned home and having to eat the chocolate that she made.[13]

Koharu and Hisame are both serious, and Koharu views Hisame as someone who understands her implicitly.[14] Hisame wants Koharu to rely on her and Suzu more, and is willing to butt heads with her in order to get her point across.

Suzu is one of the people Koharu feels she can bear her true feelings around. She views Koharu as too serious, but respects her greatly as a stage girl. Koharu wishes for Suzu to be more serious and to study harder,[15] but also recognizes her effort towards the stage and recognizes that their differences are important to their ability to rely on each other.[16]

Koharu views Maya as her destined partner, after first seeing her at The 52nd Theater Alliance Recital and her ability to perform on stage with others, rather than alone.[17] She desires to determine what the difference between her and Maya is, and to eventually overtake her on stage.

Sakura is Koharu's younger sister, two years below her. They have a somewhat fraught relationship, as Sakura wishes for Koharu to explain herself more and not constantly shut her out.[18] Sakura says she became good at building in order to create barricades to avoid Koharu.

Yakumo and Koharu are similar. As such, Yakumo is seen taking a bigger interest in Koharu and helping her improve. She can understand Koharu well and tries to nudge her to be more open about her wants and opinions on things. That is one reason she put Koharu in the position of being the class representative - to try to get her to interact with her fellow classmates more and to have her choose the students for the play that all new Seiran students do.

[Star of the day] Koharu Yanagi 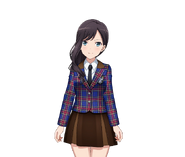 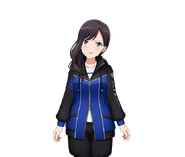 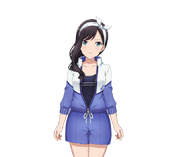