I'm really confident in my acrobatics!

Miyu Tomita
Lalafin Nonomiya (野々宮 ララフィン, Nonomiya Rarafin) is a character in the Shōjo☆Kageki Revue Starlight franchise, original to Re LIVE. She is a second-year student from the Stage Expression Course at Frontier School of Arts.

A cute and carefree Stage Girl. Used to model as a child before entering Frontier School of Arts to broaden her artistic horizons. Now enthralled by the stage, she throws herself wholeheartedly into her lessons. Has gymnastic experience, making her great at dynamic and physical action performances. Also fond of anime, manga, and tokusatsu dramas [3].

Lalafin is often mistaken for being younger than she actually is, mostly because of her small stature. This misconception extends to some of her schoolmates, with Tsukasa Ebisu once mistaking Lalafin for a kid from the neighborhood and Misora Kano not realizing Lalafin was her senior.

Lalafin has blue eyes and long pink hair that she usually keeps in half-up half-down pigtails.

Her Frontier School of Arts uniform consists of a white button-up shirt, a red bow, a black vest, a burgundy blazer, a burgundy pleated skirt with gold trimmings, white ankle socks, and orange-and-brown boots. Her accessories follow bunny-themed designs, such as a bunny-ear hair hairband, dubbed by her as the "cutting-edge Bunnyfin hairband," on her hair and bunny bows on her boots. Her burgundy blazer appears to be too big for her, with both sleeves being too long for her arms and the bottom of the blazer nearly reaching the bottom of her skirt.

Her practice outfit consists of a pink leotard and white leggings.

Her Revue outfit consists of a red vest with a white square in the center. On the sides of the white there are three gold buttons. The top of the vest had white frills. She wears a pink jacket with a gold trim. She wears thick brown gloves with a golden trim. Around her neck is a red scarf held in place by a gold ring with a star in the center. She wears two belts going opposite ways around her waist. She wears a light pink skirt that overlaps itself in the front. The skirt has two inches of white around the edges. She has a brown strap around her left thigh with a golden bunny in the center. She wears ankle-high brown boots with a golden trim on the top and bottom. The boots split in the middle that reconnect at the end of the ankle. There is a shorter piece of boot where it is split open. At the ankle there is a belt around the boots.

Lalafin has a strong sense of what she believes is right and sticks to her values very thoroughly. The most predominant of these values is her ideas of heroism, as she aims to act in the name of justice and emulate the heroes she's watched throughout her life. Lalafin also values proactivity and hard work, which she herself establishes in Transforming Heroine! Cinderella Reimagined! Part 5:

Lalafin: But isn't happiness something you've got to claim for yourself?

Lalafin: I just don't know that it's a thing someone else can just give you.

Lalafin: It's like my mama always told me. What's easily won is easily lost.

Lalafin: And on the flipside, something you really, REALLY want and work super hard to get, you'll never let go.

In some ways, Lalafin’s strong sense of right and wrong makes her stubborn; in Frontier School Story, Lalafin gets kicked out of her S-Con group for insisting on keeping her flashy action scenes in, which the rest of the group disagreed with her on. However, Lalafin is willing to accept when she’s wrong. In Transforming Heroine! Cinderella Remagined!, when Shizuha challenges Lalafin’s definition of happiness by saying that happiness can look different to different people, Lalafin apologizes for not considering that others may define happiness in other ways without their alternate definitions making their happiness any less real.

Lalafin tends to be pretty averse to conflict. This trait of hers comes through in Stranded Stage Girls, where she tries to mediate between Akira and Fumi[4], and at the end of the event, Lalafin is shocked to realize that one day, as a Stage Girl, she will have to fight her friends at Frontier[5] She also enjoys making fun of people, like when she tells Nana about Tsukasa's "stress management techniques"[6] and when she teases Claudine for having very little experience in romance[7].

According to Shizuha Kocho's memo, Lalafin is half-German. This is elaborated on by Lalafin during her Main Menu dialogue, where she states that her mother is German. Her mother read her stories from a book with "the prettiest illustrations on it" when Lalafin was in grade school, most notably "Cinderella." According to her mother, Lalafin would always stay up to hear the end of "Cinderella" and wanted to be the princess when she grew up.

Lalafin was a child model and a child actress. She appeared on TV and in magazines. As a child actress, she once played a girl being kidnapped by a supervillain. This led to her love of superheroes. Watching superhero shows inspired her to do rhythmic gymnastics.

She did various kinds of work in the performance field but described theater as "the hardest. But also the most fun!" These experiences led her to want to learn more about acting professionally and to study at Frontier School of Arts.

Lalafin and Shizuha have a close bond. They often spend time watching anime and playing video games together, both of which they share a passion for. Because of Lalafin's dislike for vegetables, Shizuha tries different ways of making her eat healthily. It was Shizuha who told Lalafin that she could "jump higher", up on a brilliant stage. Since then, Lalafin aspired to aim higher in theater.

Tsukasa is also one of Lalafin's close friends. Lalafin teases Tsukasa about her tastes in clothes and food, while Tsukasa indulges her with playing around as well. Tsukasa once described Lalafin as a perfect fit for playing honest and kindhearted protagonists[8]. Whenever Tsukasa is struggling with a role, Lalafin does not hesitate to lend a hand.

Aruru first met Lalafin when Shizuha suggested they approach her as they were looking for a student who can do stunts. Because of their love for fun and excitement, Aruru frequently goofs off with Lalafin. When they're not rehearsing for action scenes, Lalafin often joins Aruru in coming up with catchphrases and playing with slime.

As one of the upperclassmen, Lalafin helps Misora feel more at ease in the school. As Misora is great with athleticism, she does a lot of training alongside Lalafin, who's normally in charge of the stunts. Usually in their free time, Lalafin joins Misora in eating sweets and watching anime. Lalafin has once remarked that having meals with Misora is fun since she enjoys food so much.

The New Cinderella: Champion of Justice!

[Star of the day] Lalafin Nonomiya 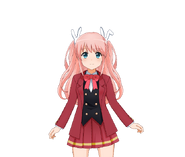 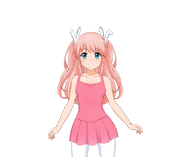 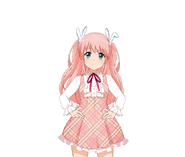 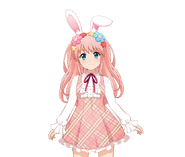 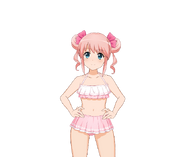 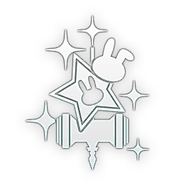