I won't be outdone by anyone, not even Akira-san!

Yume Takeuchi
Liu Mei Fan (リュウ・メイファン, Liu Mei Fan, 柳美帆[1], Liǔ Měifān) is a character in the Shōjo☆Kageki Revue Starlight franchise, original to Re LIVE. She is one of the distinguished students from the Stage Acting Department at Siegfeld Institute of Music with the title of "Frau Rubin".

An exchange student from China who was a famous child actor back home. Well-mannered and respectful, she has a strong drive to surpass Akira Yukishiro's skills.

O absolute ruler, I have travelled a thousand miles and finally met you. I have found my stage.
My ruby is hidden in the dragon's chest. O noble platinum, I offer my life to you.
Frau Rubin - Liu Mei Fan! Ranshao ba jiqing re yan, wangdao dang dang[3]! O king, my burning passion will create your noble path!

Mei Fan has purple hair that is in a long ponytail on her left side. Her hair reaches to her thighs. She wears a shrine card like hair tie. She has amber eyes.

Her school uniform consists of a beige collared formal jacket, which has a vest design to it including having the right side overlay on the left with four buttons to hold it closed. On her left shoulder is the Siegfeld school emblem. The sleeves cuffs are black with a beige stripe in the center. She wears a dark purple sweater vest underneath the jacket. She wears another white collared shirt underneath both of those. Attached to the white shirt is a dark purple bow. The ends of the bow reach her stomach. The bow has a red center. She wears a black pleated skirt with two stuffed animals attached to the right side of it. She wears grey stockings that go to her thighs. The top of the stockings have a gold trim. She wears black loafers.

Mei Fan’s casual outfit consists of a white turtleneck with the words “Los Angeles” on it. The turtleneck exposes the bottom of her stomach. She wears purple shorts with two straps attached to them that make them seem like overalls. She has a stuffed panda attached to her right side of the shorts.

Mei Fan’s practice outfit consists of a navy blue leotard and white tights. There is a gold pattern on the left side collar of the leotard. She wears a navy blue choker around her neck.

Her Revue outfit consists of a black collared dress. Down the center there are golden lines as well as on the collar. From the top to the center of the dress in the middle of the golden lines it is white. There are three sets of golden button in that area equally spaced below her chest. Her sleeves have two connected yellow stripes that form a novel shape on the front of the sleeves. She wears a white shirt underneath that can only be seen at the sleeves. She wears a brown belt around her waist with an emblem on the center of it. She wears knee-high black combat boots. From the top to the ankle, there are yellow laces going down them. The boots have heals. Around her shoulder is a jacket. The main color of the jacket is white. It has gold trims and golden ropes at the collar. One rope is tied loosely around her chest to hold it on. The underside of the jacket is purple with three unconnected golden stripes toward the bottom. On the outside, the jacket has four inches of the edge being the same purple color. Right above the purple are three unconnected gold stripes. The jackets sleeves are cuffed, having a golden trim and a golden button.

Typically a cheerful and happy girl, Mei Fan herself is also a crybaby based from her attitude if there is something touchy, to a point she cries loud for sometimes (most notably after having to say goodbye to a pet dog raised by the Edels). She is determined, passionate, and slightly oblivious, even to her own feelings. It's stated in the story that she's popular with the student body as the "Edel whom students feel the closest to." However, she's susceptible to being teased by Yachiyo because of her occasional inability to tell if people are joking. She can be extremely stubborn when it comes to things she cares about, such as leaving her home country to become an Edel and refusing to give up even when Akira and Michiru tell her to. Overall, she is a hardworking and earnest girl.

She is extremely addicted of fortune-telling, but her bad predictions have an uncanny knack of coming true, so everyone avoids her fortunes lately [4].

Born and raised in China, Mei Fan trained in Beijing opera when she was younger. She also received training in martial arts which she says was to train her physical strength and now helps customize her performances.

Mei Fan decided to enroll to Siegfeld Institute of Music after she saw Akira perform in Elysion. She then learned Japanese, studied, and rehearsed to go to Siegfeld. Mei Fan passed the entrance exam with an impressive score and was the only foreign student to pass the entrance exam.

When Akira and Michiru come to the room the next morning, Mei Fan is in a dogeza (a kneeling bow with your forehead pressed to the ground) in front of the door and has been there since 6 am. She assumes that she somehow hurt their feelings and that is why they won't let her become an Edel. Michiru finally explains to Mei Fan that she's unfit to become an Edel because of her selfish desire to stand on stage with Akira. She does not understand the weight of the school that the Edels hold.

Even after the explanation of her rejection, Mei Fan hits a gong in the courtyard of the school to catch the attention of Akira. She declares that she won't give up and will train even more.

Mei Fan: "My passion burns like no one else! I will prove to you that I can be of help!"

- The Dying King and the Four Knights: Chapter 2-2

Michiru and Akira are impressed by her straight-forward passion and think she can become an edel who makes the king shine.

Akira is the reason why Mei Fan ever joined Siegfeld. As such, Mei Fan looks up to Akira a lot, wanting to one day be able to surpass her in talent. Akira gives her what she needs to keep improving and seems eager to watch her grow in her abilities, whether or not she ever tells those thoughts to Mei Fan.

Yachiyo and Mei Fan are close friends. Mei Fan often finds herself on the receiving end of Yachiyo's teasing more often than not. Despite that, they have a very good friendship and help each other improve in many ways. Mei Fan pushes Yachiyo to her full potential and vice versa.

Mei Fan treats Shiori like a younger sister a lot, as shown during the time when Shiori was sick. She looks after her and tries to be a good role model for the younger girl. She is seen sometimes worrying about her after practice, making sure she's feeling good and can keep going on, making she she isn't pushing herself too much.

Mei Fan and Michiru first meet when Mei Fan asks to be appointed as an Edel. Michiru is the one who denies her, believing that Mei Fan doesn't understand the true burdens an Edel must be willing to take on. After seeing how passionate Mei Fan can be, Michiru recognizes how much of an asset Mei Fan could be and agrees to make her an Edel.[5] Michiru feels that Mei Fan doesn't look up to her nearly as much as Mei Fan looks up to Akira.[6] She initially sees Mei Fan as too impulsive, rushing into things without a plan, but she wants to help Mei Fan achive her goals.[7] When Mei Fan wants to help Shiori recover from her cold in Siegfeld General Hospital High-Class Prescription, Michiru is the one to come up with a concrete idea and suggest performing a psychodrama. Over time, they become closer. Michiru helps Mei Fan recognize her own strengths and aspirations as a performer[8], and she encourages Mei Fan to look within herself for answers instead of only looking to Akira.[9] They enjoy being challenged by each other.[10]

The Day Their Wish Comes True

Day Off for Two

Revue of Succession, Change, and Awakening

Revue of Emperor, Fool, and Empress 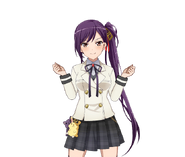 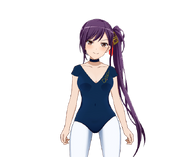 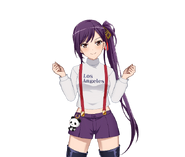 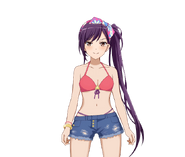 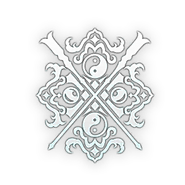