Yuka Ozaki
Michiru Otori (鳳 ミチル, Ōtori Michiru) is a character in the Shōjo☆Kageki Revue Starlight franchise, original to Re LIVE. She is one of the distinguished students from the Music Acting Department at Siegfeld Institute of Music with the title of "Frau Saphir".

This Stage girl is Akira Yukishiro's ever-supportive friend. While her singing, dancing and acting talents are on par with her friend's and she wants to become a top star herself, she wants even more for Akira and the others to develop their talents. Very affable, and has a lot of fans at the school [2].

What shines doesn't know shade. What is pure doesn't know pain.
Hence my blue flame will shine on the throne of platinum and illuminate the stage of the king.
Frau Saphir - Michiru Otori! Together with the king!

Michiru has short blond hair that reaches just above her shoulders. She wears a braid on her right side that wraps around to the back of her head. She has an ahoge on her head.

Michiru’s school uniform consists of a beige collared formal jacket, which has a vest design to it including having the right side overlay on the left with four buttons to hold it closed. On her left breast there is a golden pin of two swords forming an x shape. On her left shoulder is the Siegfeld school emblem. The sleeves cuffs are black with a beige stripe in the center. She wears a dark purple sweater vest underneath the jacket. She wears another white collared shirt underneath both of those. Attached to the white shirt is a dark purple bow. The ends of the bow reach her stomach. The bow has a red center. She wears a pleated black skirt with a white frilly skirt underneath. She wears thigh-high stockings with a tiny black bow on both of them on the side facing out from her body. She wears black loafers.

Her casual outfit consists of a white shirt tucked into black shorts with a brown belt. She wears a yellow sweater over it and has a blue sailor scarf.

Michiru’s practice outfit consits of a navy blue leotard and white leggings. There is a gold pattern on the left side collar of the leotard. She wears a navy blue choker around her neck.

Michiru’s Revue outfit consists of a black long-sleeved shirt with a collar and golden trims. There are two gold lines running down to form a box around the middle of the shirt. There are two buttons on each side inside the box. On her left breast she has an orange medal. She wears a white shirt underneath that can be seen on her wrists. She wears a black belt with an emblem in the center around her waist. She wears a white thigh-length skirt with four buttons on it. She wears thigh-high black boots that are folded at the top to form a collar. The collar of the boots is trimmed with a golden color. The boots have heals. Around her shoulder is a jacket. The main color of the jacket is white. It has gold trims and golden ropes at the collar. One rope is tied loosely around her chest to hold it on. The underside of the jacket is orange with three unconnected golden stripes toward the bottom. On the outside, the jacket has four inches of the edge being a light orange. Right above the light orange are three unconnected gold stripes. The jackets sleeves are cuffed, having a golden trim and a golden button.

Michiru is a cheerful, friendly, hard-working and supportive stage girl who's always willing to lend a hand to her friends and classmates. Beneath her positive exterior however, Michiru can be harsh and unforgiving; much like Akira Yukishiro, she doesn't look too kindly upon those who fail to meet her expectations. She is determined and refuses to give in when it comes to achieving her goals. Much of Michiru's drive comes from her devotion to help Akira succeed, often taking up a mentorship role around her and the other Edels. She is also highly perceptive and takes pride in collecting useful information on everyone she finds interesting. Her outward cheeriness combined with her serious attitude is sometimes viewed as intimidating.

Michiru saw Elysion's Chapter of Kings with Akira around when they were eight- or nine-years-old, which inspired them to train in singing, dancing, and piano in order to perform in Elysion themselves one day.[3]

Akira and Michiru are childhood friends that aspired to enter Siegfeld together after seeing a performance of Elysion as children. They made a promise to become Edels at Siegfeld someday, with Michiru promising to do anything in her power to help Akira become Frau Platin. Since growing up Michiru still considers Akira her closest friend and confidant, they greatly admire and have a deep trust in each other. In her role as Frau Saphir, Michiru watches over Akira; acting as her primary support and advisor.

Their relationship in-game has been described as that of a cat and mouse. Michiru has tried cornering Yachiyo at various times about what was inside her suspicious notebook. The one time Yachiyo almost got caught, she only managed to throw Michiru off her scent with an outrageous lie about what was inside.[4]

After the events of Dying King, they keep up this tense little game between them, though it's more about Michiru trying to get Yachiyo to do well rather than some concrete secret like before.[5] Michiru sees in Yachiyo what she saw in Akira "that day".

Michiru and Shiori are very friendly with eachother, and tend to talk a lot about food. At first, Michiru mostly sees Shiori as Fumi's younger sister, which disgruntles Shiori because she wants to be evaluated on her own merits.[6] Michiru looks out for Shiori, whether it's helping her train[7], giving her acting advice[8], or getting her comfortable with the other Edels[9]. Michiru calls Shiori the Edel with the most potential[10] and admires the genuineness Shiori puts into her acting[11]. She is surprised by how strong Shiori is and sees Shiori as a potential future Frau Saphir.[12]

Mei Fan and Michiru first meet when Mei Fan asks to be appointed as an Edel. Michiru is the one who denies her, believing that Mei Fan doesn't understand the true burdens an Edel must be willing to take on. After seeing how passionate Mei Fan can be, Michiru recognizes how much of an asset Mei Fan could be and agrees to make her an Edel.[13] Michiru feels that Mei Fan doesn't look up to her nearly as much as Mei Fan looks up to Akira.[14] She initially sees Mei Fan as too impulsive, rushing into things without a plan, but she wants to help Mei Fan achive her goals.[15] When Mei Fan wants to help Shiori recover from her cold in Siegfeld General Hospital High-Class Prescription, Michiru is the one to come up with a concrete idea and suggest performing a psychodrama. Over time, they become closer. Michiru helps Mei Fan recognize her own strengths and aspirations as a performer[16], and she encourages Mei Fan to look within herself for answers instead of only looking to Akira.[17] They enjoy being challenged by each other.[18]

Michiru and Fumi attended Siegfeld together in their first year.[19] When Fumi quit Siegfeld shortly after Akira became Frau Platin in their second year, Michiru confronts her and correctly predicts that Fumi's time as a Stage Girl is not over yet. Michiru claims that the two of them were friends, although Fumi denies this. During rehearsals for Play A, Michiru helps Fumi realize her unresolved history with Shiori and her true motivations for helping Tamao revive the Rinmeikan Performance Department, both of which Fumi had previously been trying to ignore. Michiru thinks Fumi is similar to Akira in terms of skill level and ability to act genuinely on stage, and she says that Fumi has "the qualities of a king." She wanted Fumi to stay at Siegfeld so that Akira would feel continually pushed to improve. Even after their estrangement, Michiru looks forward to what Fumi will do next and still sees her as highly skilled, although she is disappointed with Fumi for trying and failing to act self-sacrificially without understanding the consequences of her actions.[20]

The Day Their Wish Comes True

[Star of the day] Michiru Otori

Revue of Contraction and Breakthrough

Revue of Hierophant and Chariot 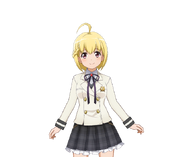 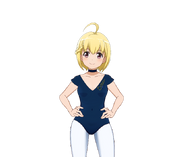 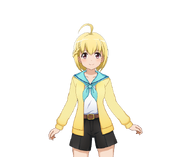 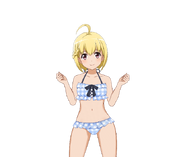 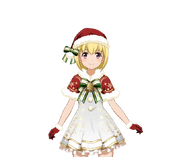 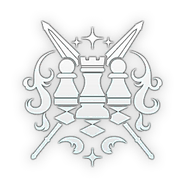