I'm plenty confident in my stamina!

Misora Kano (叶 美空, Kanō Misora) is a character in the Shōjo☆Kageki Revue Starlight franchise, original to Re LIVE. She is a first-year student from the Stage Expression Course at Frontier School of Arts.

Aruru Otsuki's childhood friend and the person who knows her best. Raised by parents who run a theater troupe, this Stage Girl has never been far from her calling. Has developed unflinching physical and mental fortitude after years of Aruru's antics. Eats a shocking amount of food in order to keep up her stamina.[2]

It's something that's always been with me, so that's why I had lost track of it.
My stage — carry it through with love to the depths of this heart! Fly high!
Stage Girl — Misora Kano! Aiming for that sky, to Frontier!

Misora has short red hair that is usually kept tied up in a loose side bun on the right side with bangs swept to the left and yellow-brown eyes.

Her practice outfit consists of a blue shirt with a white design on the top center, black pants, and a red armband on her left arm.

Her Revue outfit consists of a brown corset with gold edges that is split apart at the bottom front. There are five gold buttons on both sides. Underneath it is a low cut white dress shirt that has black laces at the chest area holding it together. There are gold stars on both collars. Underneath that appears to be either a black low cut tank or bralette. She wears a grey-purple skirt with white frills. It is double layered. Over her corset and skirt are two brown belts going in opposite directions. She wears a blue jacket with gold trims. The sleeves on the jacket are open on the upper arm and have brown laces across it. She wears thick brown fingerless gloves with gold at the base. She has a red scarf around her neck that is held together by a gold button with a star on it. She has a brown bracelet on her right thigh. She wears brown boots that are folded over at the top to create a collar look. The edges of the collar and base of the boots are gold. The sides of the boots facing out have two gold ribbons attached.

A serious and hardworking Stage Girl, who is looking for the role she must perform by herself.

Misora is athletic, with a lot of stamina and a love for sports and physical activity. She eats a lot of food to make up for this, a fact often noted by the other members of Frontier. Aruru describes the way Misora eats as “fascinating”,[3] and also says that Misora looks happy when she eats, and can draw others to try the same things as her.[4] All four members of Frontier have commented on how interesting Misora’s eating is.

She worries about her skills as an actress, and works hard in order to not bring down the acting ability of the group, sometimes becoming so stressed about messing up that she ends up forgetting her lines. She views the physical parts of acting as her forte.[5] She comes to view her passion towards the stage as her strength, something that can surpass the skills and talents of other stage girls.[6] Shizuha describes her as as an adaptable stage girl,[7] however, and remarks on how full of notes Misora’s scripts are.[8]

Misora isn’t an avid reader, but has been drawn in by books like Don Quixote and The Little Prince. Despite this, she does visit the library often, but does not spend much time there, just taking out books and leaving.[9]

Misora views herself as a bit socially inept, and worries about saying tactless things.[10] Aruru says that Misora is good with words.[11]

She works part-time at a bathhouse.[12] She also walks dogs.

Misora's parents run a small theater troupe, the Sky Blue Theatre Troupe, which she often helps out, and used to act in as a child. She mentions that their career led to some hardships, which is why they were "not entirely happy" when Misora chose to pursue the same career as them.

She is the middle child in her family, with two younger sisters and two older sisters. Because of this, she jokingly states that the "bathroom sink was a battlefield every morning".[13]

Misora’s childhood nickname in her family’s theatre troupe was Snow White, because of an anime adaptation of Snow White where she was a glutton.[14]

Misora has been stated to have played Dorothy in The Wizard of Oz and Louisa in The Sound Of Music with her parents’ theatre troupe.

Misora and Aruru wrote Captain Twins together, after watching S-Con the previous year, trying to imagine the kind of role they’d perform if they were on S-Con’s stage.[15]

Aruru is Misora's childhood friend. During a performance The Wizard of Oz as kids, Aruru began ad-libbing, and the two performed a chaotic continuation of the story.[16] The two often bounce off each other as stage girls, filling in the gaps the other is missing.[17] Aruru drags Misora along into her ideas, and Misora follows to try and keep Aruru safe.[18] Misora credits Aruru as the reason she started aiming to become a stage girl[19], but seeks to travel down her own path, without following Aruru. Aruru says that her and Misora are best friends.

In Junior High, Misora and Aruru watched S-Con, becoming inspired by the performance of a first year Tsukasa. Misora builds on this inspiration to help encourage Tsukasa to join their performance group for S-Con that year, returning to the stage. Misora respects Tsukasa a lot, inspired by the large strides she’s made as a stage girl.[20]

Misora and Tuskasa performed the same role for the First Years’ Reader’s Theatre, a year apart from each other (The Little Prince). Misora uses Tsukasa’s advice to inform her role, and Tsukasa is inspired by Misora’s interpretation and performance[21], believing that Misora’s performance was ultimately better than Tsukasa’s had been.

To prepare for their roles in their Cinderella performance, Misora attempted treating Tsukasa like a daughter, but became overly worried about the way that Tsukasa treats herself and an “overprotective parent”.[22]

Misora has stated multiple times that Tsukasa is pretty.[23][24]

Shizuha’s initial support of Captain Twins, and intent to help Aruru and Misora find more stage girls to fill their roles, initially keeps Misora from backing out of S-Con.[25] Misora views Shizuha as a role model as a stage girl, finding herself often indebted to Shizuha, often relying on her for help and getting advice from her.[26] Misora plans an egg hunt as a way to thank Shizuha for everything she’s done for them.[27] Shizuha enjoys joining Misora on her morning runs.[28] Misora often helps Shizuha with a variety of preparations around Frontier, both for specific events[29] and for the Performance Festival.

Because both of them specialize in action scenes, they often practice fighting scenes together. Misora respects Lalafin as an upperclassman and stage girl, looking to learn from her to improve her own skills in action scenes.[30] The two have a more of a playful relationship, and discussions between them, while meaningful and focused, also can turn teasing or silly.[31] Lalafin is the closest to matching Misora in amount of food eaten, but still can’t keep up with her.[32]

[Star of the day] Misora Kano 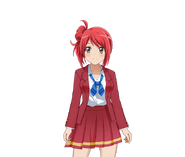 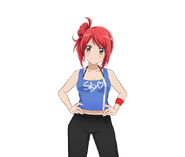 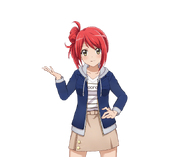 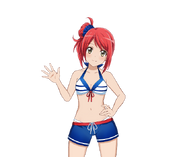 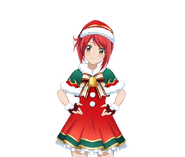 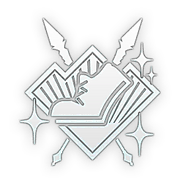