I will protect them! Forever... Again and again!

Revue of Solitude
Revue of Bonds

This Stage Girl is the de facto mother of the 99th class, kind and caring to her classmates. Nicknamed "Banana". Talented not only in singing and dancing, but also as a director. Still delighted by the group performance of "Starlight" back in her first year.[2]

The fruit has become ripened and heavy upon the stage...
But it remains tender, and someone must protect it all!
99th Class, Nana Daiba! I will protect them! Forever... Again and again!

Nana has emerald-green eyes and dark-blonde hair, which goes down to the nape of her neck. Her hair is generally styled in half-twintails that are said to look like bananas, which she always ties with chartreuse ribbons. Her bangs are long and frame her head and eyes.

School Uniform
Her Seisho uniform consists of a gray blazer with dark-gray trimming and a gray knife-pleated skirt, a white button-up shirt, a red ribbon tie, and brown loafers, which she wears with black crew socks.

Casual Outfit
Her casual outfit consists of a long yellow blazer with dark-brown trimming, a white T-shirt, and denim shorts. She also wears a teal tank top that fades into yellow, along with high-waist coral capri tracksuit bottoms around the dorm.

Practice Outfit
Nana's practice outfit consists of a black leotard with grey leggings. She wears a white crop top over it.

Revue Outfit
Her revue outfit comprises a white jacket with golden piping, that is light-grey in the middle-third portion, as well as in the collar; red cuff flaps with a golden trim, and a golden armband, epaulettes, and thick-braided aiguillettes. Her belt is golden with a golden buckle. Her skirt is a light-gray knife-pleated skirt with a white band near the bottom, a gray ribbon at the back, and a light-pink tulle dress tail. Like all the other girls, she wears black boots with golden trim detailing and a tassel, as well as a red pelisse jacket with golden piping over her left shoulder, held to a red shoulder belt by a golden aiguillette and a golden button. Her weapons are a pair of Japanese swords with a yellow gem for a pommel.

Karen is deeply appreciative of Nana's efforts to help everyone out, and is the one to give her the nickname "Banana," as she considers her to have the sweet, kind, and nourishing qualities of one. Karen's view that the ephemeral nature of theater is what makes each performance worth treasuring directly opposes her wish to grasp onto her beloved performance of "Starlight" during the 99th Seisho Festival. While after her loss Nana has trouble coming to terms with the idea, she is still cares for and is supportive of Karen as they move towards a 100th Seisho Festival without Hikari.

Junna holds a great amount of respect for Nana, having once told Nana that she considers her to be "a true stage girl".

So Many Frogs to Choose From

The Phantom and Christine

Trying Out the Mask

Wrapping Up the Year

The Frog Goods Are Here ♪

[Star of the day] Nana Daiba

[Star of the day] Junna & Nana

Revue of Distortion and Equilibrium

Revue of Hermit and Justice 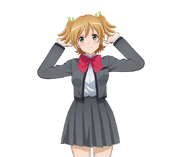 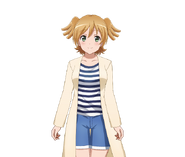 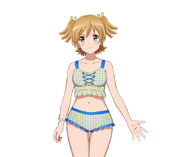 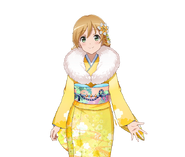 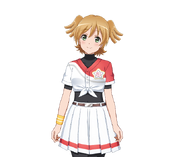 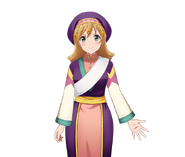 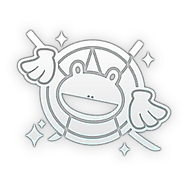