Risa Tsumugi
Rui Akikaze (秋風 塁, Akikaze Rui) is a character in the Shōjo☆Kageki Revue Starlight franchise, original to Re LIVE. She is a first-year student from the Performance Department at Rinmeikan Girls School.

Rui's became inspired to act after being instantly smitten with Tamao Tomoe's performance skills in junior high. Thanks to Tamao's training, she's gradually gotten better about her stage fright and dealing with pressure. She has a strong admiration for Tamao as the person who inspired her to act [2].

Drawn by a distant pearl, I rested my blade.
Distance awakes me. I draw my blade and run to you.
Rinmeikan Performance Association — Rui Akikaze! My life is on this stage!

Rui has dark brown, wavy hair that goes below her waist, even in her usual style of a high ponytail. Her bangs are parted above her right eye, and two sections of her hair are left out of her ponytail to hang over her shoulders. She has cranberry colored eyes.

School Uniform
The Rinmeikan students wear a sailor-style uniform, described by Fumi as being quite retro. It consists of a waist-length black blouse has a white sailor collar decorated with a single black stripe, matching the cuffs of the bishop-style sleeves, and a chest flap in the same color of the uniform that is conversely decorated with a single white stripe. A red ribbon is worn as the traditional ornamental tie. The blouse is worn over a knife-pleated pinafore dress in black that is decorated with two golden buttons placed horizontally along its waist, making them visible through the front opening of the blouse. Rui wears her uniform with solid black knee-high socks and brown loafers.

Casual Outfit
Rui wears a patterned teal high-waist dress with a dark blue longline blazer over it. She accessorizes it with a teal flower hairclip on the right side of her bangs.

Practice Outfit
Rui's practice outfit consists of a turquoise short-sleeved leotard with a lace neckline and sleeves. Underneath it, she wears white tights.

Revue Outfit
Rui's revue outfit consists of a kimono that fades from a lighter to a darker tone of forest green. She ties the sleeves of her kimono with a tasuki, which allows for long, black, fingerless gloves to be seen underneath. The collar has golden piping and a black lace han eri, and the sleeves and bottom hem have a gold band in an over-under pattern. The kimono has a front opening which shows a white skirt with box pleats and a gold band, underneath which she wears a black petticoat. The obi is in an imperial purple with a top golden piping and a front slit, underneath which she wears a gold obi-age; over the both of these, she wears a thick red ribbon which ties as a bow in the back and an obi-shime consisting of a thick golden string, with two obi-dome in the shape of a golden five-petal flowers with golden tassels. She wears black over-the-knee boots resembling jika-tabi with a golden trim and heels, with bright red ribbons tied around the ankles and knees, and golden anklets. Rui wears a red spaulder with gold edges and red tassels, tied to her arm with a red ribbon and over her shoulder with a golden string, and a red camellia on her hair.

Rui has a very shy and awkward personality, contributed to by her extreme lack of confidence and tendency to keep opinions to herself. She has tried to overcome the sociophobia but makes little progress. She claims that is the reason she can never advance in her kendo ranking.

Rui's admiration of Tamao is the driving force behind many of her actions, and she is often eager to completely abandon what she is doing in favor of helping Tamao or doing her a favor in some way. The other Rinmeikan girls are aware of her intense admiration for her senior, to varying response.

Rui's grandmother was an actress, who specialized in fight scenes[3] and won awards for playing Onikage in "Tales of Onikurenai." Her grandfather was a kendo master and taught Rui kendo[4]. Despite having trained for a long time, Rui has trouble getting promoted in kendo because the exams make her nervous.[5]

Rui attended the same junior high school as Tamao. In Rui's first year there, she saw Tamao perform on stage and was inspired to join their school's drama club, despite Rui's stage fright and shyness.[6] During junior high school, Rui and Tamao became good friends. After Tamao graduated, Rui took over the club and eventually enrolled at Rinmeikan to keep following in Tamao's footsteps.[7]

Rui has great respect for Tamao, who helped her achieve her dream of becoming a stage girl and was also her mentor when she was younger. Rui is seen to be very flustered around Tamao. Some of the official artwork reveals that Rui most likely has romantic feelings towards Tamao.

Rui feels at ease around Yuyuko, as she said that they became friends before she knew it.[8] She calls Yuyuko, Yukko, as a term of endearment, and is the only one that does so. However, she is also annoyed with Yuyuko due to the latter's sleeping habit.

Fumi is Rui's senior at Rinmeikan and thee two respect each other as performers. Fumi sees Rui as a stage girl with a lot of potential, but is troubled by her willingness to live in Tamao and others' shadows, encouraging her to share her own thoughts about performing and take center stage more.

Like Fumi and Tamao, Rui looks up to Ichie as a senior. In the Purehearted White Day Recipe event, Rui says she first met Ichie when she was looking for Tamao at Rinmeikan earlier in the school year. To help ease her nerves, Ichie offered Rui ‘barley tea’, which was actually noodle sauce. Rui took it in stride as Ichie patiently guided her and led her to Tamao's classroom. In a memoir, Rui can be seen hanging out with Ichie as they visit Fumi's café as she's working.

Instant of Stillness and Motion

With All Her Heart

Fun on a Day Off

To the Wonderful World of Rakugo

[Star of the day] Rui Akikaze

Revue of Salvation and Rebirth

Revue of Death and Hanged Man 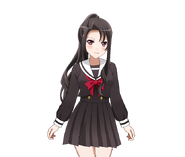 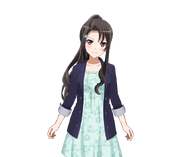 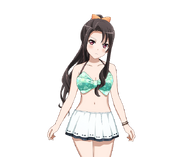 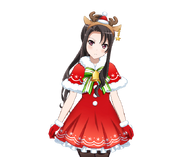 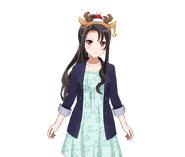 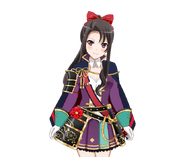 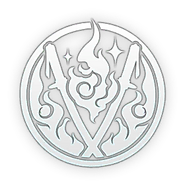