Edit
This article is about the anime. For other uses, see Shōjo☆Kageki Revue Starlight (disambiguation).

And it shall be bestowed upon you, the Star which you have longed for —

Shōjo☆Kageki Revue Starlight (少女☆歌劇 レヴュースタァライト, Shōjo☆Kageki Revyū Sutāraito) is a television anime produced by Kinema Citrus. The anime was licensed by Sentai Filmworks for simultaneous streaming through HiDive, with subtitles available in English, Spanish, and Portuguese, as well as an English dub.

The anime is not a direct adaptation of Shōjo☆Kageki Revue Starlight -The LIVE- #1, and instead only shares some plot points while working on the same themes.

Inspired by a play called Starlight, Karen Aijo and Hikari Kagura make a childhood promise to perform that very play together someday. Hikari moves away, and twelve years later Karen has enrolled in Seisho Music Academy to continue working toward their promise. As the 99th Graduating Class rehearses for their annual production of Starlight, a mysterious underground audition orchestrated by a talking giraffe allows Karen and Hikari to reunite to compete with the other stage girls in battles for the position of top star. 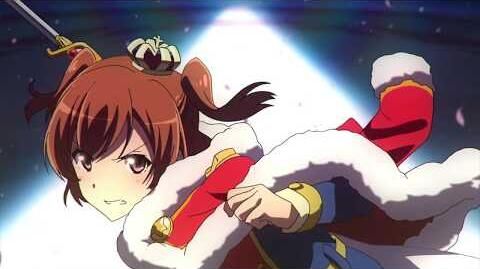