It makes me so happy that I can practice for the stage every day.

Hikaru Tono
Shiori Yumeoji (夢大路 栞, Yumeōji Shiori) is a character in the Shōjo☆Kageki Revue Starlight franchise, original to Re LIVE. She is one of the distinguished students at Siegfeld Institute of Music with the title of "Frau Jade" and the younger sister of Fumi Yumeoji.

Once unable to take part in long lessons due to childhood frailty, this Stage Girl conquered her physical issues and is a stand-out performer. Relatively sensible among her Siegfeld schoolmates, she often winds up being the understanding and knowledgeable one despite being younger. She is still troubled by Fumi's unexplained departure from the school [2].

The flower bud unfolds to show the path of platinum.
The letter drenched in tears[3]. Secretly depart on the jade road of dreams.
Frau Jade - Shiori Yumeoji! We shall conquer the king's summit together!

Shiori is a very petite girl who bears an overall resemblance to Fumi Yumeoji with curly chest-length blonde hair that has a rose flower pin worn on the right side which matches Fumi's hair pin and droopy aqua eyes.

Shiori’s school uniform consists of a beige collared formal jacket, which has a vest design to it including having the right side overlay on the left with four buttons to hold it closed. On her left shoulder is the Siegfeld school emblem. The sleeves cuffs are black with a beige stripe in the center. She wears a dark purple sweater vest underneath the jacket. She wears another white collared shirt underneath both of those. Attached to the white shirt is a dark purple bow. The ends of the bow reach her stomach. The bow has a red center. She wears a black pleated skirt and white knee-high socks that have a design on the sides. She wears black loafers.

Her casual outfit consists of a white short sleeve shirt that is tucked into a green skirt with a brown belt. She wears a beige cardigan.

Shiori's practice outfit consists of a navy blue leotard and white leggings. There is a gold pattern on the left side of the collar. She wears a navy blue choker as well.

Her Revue outfit consists of a black collared jacket with a gold trim. The gold trim goes down to the end of the shirt on the front sides. The center of her jacket is white with gold buttons evenly spaced down the area. Her sleeves have two connected gold lines that form an oval shape on the front of her sleeves. She wears a white fancy neck scruff under her collar. On her left breast is a green medal. Underneath the jacket is a white shirt you can see at the sleeves. She wears a black belt around her waist with a gold emblem in the middle. She wears a white skirt with a gold trim. She wears black calf-high combat boots. From the top to the ankle there are yellow laces. She wears black thigh-high stocking. Around her shoulders is a jacket. The main color of the jacket is white. It has gold trims and golden ropes at the collar. One rope is tied loosely around her chest to hold it on. The underside of the jacket is green with three unconnected golden stripes toward the bottom. On the outside, the jacket has four inches of the edge being a green. Right above the green are three unconnected gold stripes. The jackets sleeves are cuffed, having a golden trim and a golden button.

Shiori is fairly timid and shy around people she does not know.[4] Because of this, people, such as Akira and the usually perceptive Michiru, do not expect how intense she can get when she is truly angered.[5][6] With people she knows, Shiori is easygoing and friendly, and she enjoys spending time with people outside Siegfeld. Yachiyo says she is like "[someone with] strong self-sacrificing tendencies and intelligent. You can tell with a glance that she tends to worry too much... But also different from a princess who simply waits to be saved."[7]

While quick to pick up new skills[8], Shiori greatly values persistence and hard work, and she gets very angry when it seems like her efforts have been discarded.[6] She is relatively new to performing at the level Siegfeld expects, so her hard work can veer into overworking, something which her upperclassmen look out for.[9] Her relative lack of experience also makes her somewhat unconfident when people ask her for advice, although she tries her best to help them even so.[10]

In addition to hard work, Shiori greatly values loyalty and has a strong sense of responsibility--her childhood promise with Fumi to perform Elysion is what drives her to train for and enter Siegfeld, and once Fumi leaves, Shiori feels a lot of pressure to perform well as Frau Jade in her absence.[11] She has a strict divide between good and bad. For example, when Yachiyo explains that Akira was only pretending to find Claudine's performance lackluster in the Fiend with Twenty Faces event, Shiori automatically sees Akira's deception as bad.[12]

Shiori is the younger sister of Fumi Yumeoji. She was always ill as a child and has brought up many times how sickly she had been back then. Fumi always was doting on her as a kid to make sure she was well taken care of and had all her needs met so they could fulfil their dreams together. Shiori has always wanted to follow behind Fumi, and did so by joining Siegfeld after her on the promise of theirs that they would become Frau Platin and Frau Saphir and create a stage for the two of them that the world had never seen.

That did not work out and Fumi left Siegfeld, causing Shiori to lose her way for a while. She worked hard to become an Edel in Fumi's place and has been trying to still make their dream come true no matter what. Beyond all of that, she had worked hard as Frau Jade and has made her place in the Edels.

Shiori's older sister. In their youth, she helped take care of Shiori due to her physical illness, and the two shared their love of the stage and dream to perform Elysion together. Shiori followed Fumi into enrolling at Siegfeld's junior high, and after Fumi's first year in Siegfeld's high school, Fumi gradually became more distant with Shiori before transferring schools and fully cutting off contact. Shiori greatly respects Fumi as a Stage Girl, and is heartbroken and burdened by Fumi’s sudden and unresolved disappearance, secretly harboring a desire for Fumi to return to Siegfeld so they can fulfill their dream together.

The two reconnect During Zeus' Decision, but Fumi struggles to reach out to Shiori properly until Venus & Cupid - Angelic Thread of Love, when Yachiyo pushes her to watch a performance of Shiori's. During the event, Fumi expresses how proud she is of Shiori's performance, and apologizes for not reaching out to her first.

Michiru and Shiori are very friendly with eachother, and tend to talk a lot about food. At first, Michiru mostly sees Shiori as Fumi's younger sister, which disgruntles Shiori because she wants to be evaluated on her own merits.[13] Michiru looks out for Shiori, whether it's helping her train[14], giving her acting advice[15], or getting her comfortable with the other Edels[16]. Shiori thinks of Michiru as "someone with a comforting warmth"[17] and feels safe in her presence[18]. She looks up to Michiru's acting abilities and calmness on stage and aspires to be as good as her someday.[19] Michiru sees a great amount of brilliance in Shiori, enough to think that Shiori has the potential to become Frau Saphir.[6]

Looking Fresh in the Mirror

[Star of the day] Shiori Yumeoji

Revue of Contraction and Breakthrough

Revue of Hierophant and Chariot 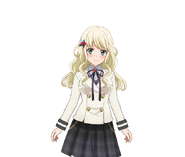 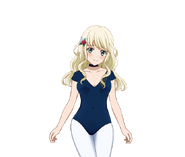 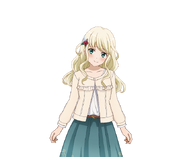 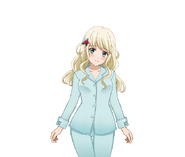 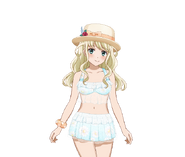 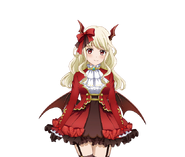 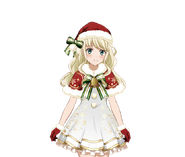 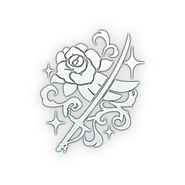