If you run into any problems at all, come straight to me for help, okay?

Mikoi Sasaki
Shizuha Kocho (胡蝶 静羽, Kochō Shizuha) is a character in the Shōjo☆Kageki Revue Starlight franchise, original to Re LIVE. She is a second-year student from the Stage Expression Course at Frontier School of Arts.

A big-sister type, always attentive and wearing a sweet smile. One of the preeminent students in the Frontier School of Arts Stage Expression Course, her looks and acting talent have put her in the spotlight since her junior-high-school days. Very health-conscious, always offering health drinks to her dubious friends [2].

Heartbroken loneliness as I fall with broken feathers. The neon lights invite the stage of bonds.
If 'now' and 'reality' are but a night's dream, I'll carve my flight onto the stage.
Stage Girl — Shizuha Kocho! I spread my wings, to Frontier!

Shizuha has wavy waist-length blue hair that has bangs swept on the right side and plum-purple eyes.

Her Frontier School of Arts uniform consists of a white button-up shirt, a cyan striped tie, a brown vest, a burgundy blazer, a burgundy pleated skirt with gold trimmings, brown tights, and black heels. Her accessories consist of a black ribbon on a gold clip that she keeps in her hair.

Her Revue outfit consists of a brown corset that is split in the middle two inches up. There is a gold trim until it reaches the split area. There are two laces at the trims just below the chest. There is a gold button on each side of the corset at the top center. Underneath the corset is a white cloth that hangs out in the center and goes down to the end of the chest. She wears a dark teal jacket with gold trims. The sleeves are split open at the shoulder and have three laces holding it together. There is a gold button on both front bottom corners of the jacket. She wears a brown belt above the jacket at the waist. She also wears thick brown gloves with a gold trim. Around her neck is the same red scarf as the others. It is held together by a golden circle with a star in the center. She wears a dark green skirt it’s a white skirt underneath it. She has a brown belt around her left thigh. She wears ankle-high brown boots with a gold trim. The boots’ tops are folded over and have a strap hanging out of them with gold at the end. The boots have heels.

Gentle, kind, and bright, Shizuha is looked up to as a role model for a lot of her peers. Oftentimes people compare her to a quiet butterfly who tries to stay level-headed in all types of situations.

Shizuha typically spends her free time doing extra-curricular activities at school, especially since she thrives in environments that invite challenges.

When she gets to thinking, her hands keep themselves busy[3], which can explain her knack for picking up new hobbies. She loves playing crossword puzzles, doing aromatherapy, and making nutritious drinks, sometimes with a type of Chinese medicine.

A running gag in the game is that Shizuha's concoctions taste awful, even when she makes the other girls in Frontier drink them. She also has a talent for tongue twisters, which is common knowledge even in other schools[4].

Shizuha is very knowledgeable with gadgets, enough to build her own PC. Because Frontier lets students use the latest technology for their coursework, Shizuha makes full use of the school's equipment, such as the VR room. She also enjoys playing video games, sometimes spending the whole weekend in her room to play.

Shizuha: "Ever since I was little, I was in love with 'the world of stories.' The fictional world of people's imaginations is full of dreams and hopes."

Shizuha's love and devotion to theater earn her a reputable status in Frontier, where her advanced skills are recognized even amongst older students.

During her first year she was often getting the lead roles, much to the dismay of other people. Early into her second year and before the events of the school story transpired, Shizuha had been avoiding acting for a while until she met Aruru and Misora, who called her back to the stage again. She has since been thankful that they reached out to her.

Shizuha mentions that she used to spend her weekends going on family trips. Likewise, she also plays video games with her parents sometimes as a way to keep in touch with each other.

Shizuha has studied both ballet and traditional Japanese dance. Nana has also brought up that she witnessed Shizuha performing onstage when they were in junior high, adding that she was awed by her acting and singing.

Not much is known about her junior high, but she does mention her old uniform is styled like a sailor outfit[5]. This is in stark contrast to the standards in Frontier, where the school is more lenient with how uniforms are worn.

Lalafin and Shizuha have a close bond. They often spend time watching anime and playing video games together, both of which they share a passion for. Because of Lalafin's dislike for vegetables, Shizuha tries different ways of making her eat healthily. It was Shizuha who told Lalafin that she could "jump higher", up on a brilliant stage. Since then, Lalafin aspired to aim higher in theater.

Shizuha and Tsukasa are also close friends, both recognizing each other's strengths on the stage. In their first year, they were rivals for some time. Whenever Shizuha is looking for role references, she asks Tsukasa to help her. Tsukasa said watching Shizuha perform onstage inspired her at the time she was starting out in theater.

Shizuha sees Aruru as someone very dear to her. Aruru first approached Shizuha with an open heart in a way nobody else did. Around Aruru and the others, Shizuha starts becoming more comfortable being herself. Their first meeting meant a lot to Shizuha, who normally feels as though people are intimidated by her.

Shizuha is incredibly fond of Misora as well. In fact, it was Misora who was the brains behind the Easter surprise for her. On normal days, Shizuha enjoys joining Misora in her morning runs, remarking how fit she manages to keep her lifestyle. One time, they had an arm-wrestling competition that ended in a tie.

Empress of the Digital World

The Riches of the World Belong to Us

[Star of the day] Shizuha Kocho 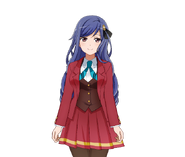 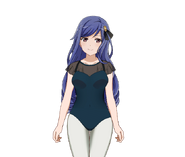 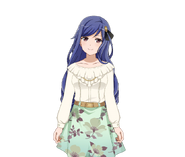 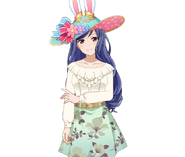 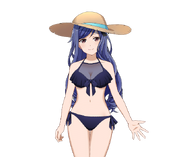 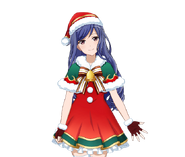