Stranded Stage Girls is an event in Re LIVE. It was the 34th event to take place in the Japanese server, and 32nd in the global one.

Kaoruko Hanayagi helps Fumi Yumeoji and Akira Yukishiro confront their past together while stranded on a desert island.

The event opens with Kaoruko Hanayagi waking up stranded on a beach in a swimsuit, quickly assuming that she must be dreaming, despite how real it feels, and calling out for Futaba Isurugi. While trying to get out of the sun, Kaoruko runs into a snake and panics, before Lalafin Nonomiya arrives and saves her with a stone axe. Lalafin reveals that Fumi Yumeoji, Hikari Kagura, and Akira Yukishiro are also on the island. Kaoruko remarks that it’s a strange group of people to have together, and Lalafin says they’re working together to find a way off the island.

Hikari, Akira, and Fumi, after walking around, determine that they’re mostly likely on a desert island, with no other islands nearby. Lalafin ran off, leaving the three to awkwardly try and address their situation. They come across a stranded sailboat and decide to search it. After searching, they find some food, fire starter, a telescope, and compass. Akira scolds Fumi for saying “overly pessimistic things” and remarks that her intentions are unimportant. They head back to the forest and meet up with Kaoruko and Lalafin. Kaoruko agrees to work with them, but they have no leads on what happened. They ponder the acquired items and the state of the island, and wonder if they’ve somehow made it overseas. Akira takes the lead in the group to search, and though Fumi seems dissatisfied with the results, says she has no problem with it. Akira assigns Kaoruko and Fumi to go explore a high cape nearby to see if they’re on an island or not, while the other three go back to explore the forest.

Kaoruko and Fumi take a break near a spring to rest on their way up the cape. Kaoruko comments on how Fumi looked at Akira earlier, and Fumi says she’s worried about Akira and that Akira probably doesn’t like her much because of her history with Siegfeld. Fumi tells Kaoruko about her past, and Kaoruko says that Fumi reminds her of someone. Fumi expresses her desire but inability to apologize to Akira, and Kaoruko says she should just get it over with.

Elsewhere, Akira, Lalafin, and Hikari talk, and Lalafin tries to get Akira to talk about how she treats Fumi, but they get distracted by a cave they can use as a base. Lalafin uses a match to see if the air inside the cave is safe, and Akira chastises her for acting without explaining. The cave was previously occupied, and has a map and a damaged diary written in a peculiar version of French. Lalafin narrates to herself about it. They bring Fumi and Kaoruko to the cave at the end of the day, and Kaoruko complains about the map making their job pointless. Fumi tries to be positive, but Akira shoots her down. Fumi says that Akira shouldn’t hold them to the standard of Edels, and Akira gets angry that Fumi mentioned Edels to her. Lalafin tries to cut the tension, and they agree to prepare to make the cave into a proper base.

Hikari is assigned the job to look out at the ocean and scan for ship sightings, and is exhausted, trying to take an early break. Akira finds her and criticizes her for it, before getting distracted by how slow Kaoruko is working. Kaoruko complains about having to carry water back to camp and the two argue about it. Fumi and Lalafin admire a squirrel, until Akira comes over and they accidentally scare it away. Akira asks why they didn’t catch it, and Fumi says there’s no need to kill an animal when they have enough food on the mountain. Lalafin tries to diffuse the tension, but Fumi cuts in and tries to express how tired everyone is and asks her to reconsider the division of tasks. Akira refuses, saying she cannot trust Fumi to do more work and has no intention of redividing the tasks.

Fumi cooks fish for the group that everyone enjoys, but Akira makes them ration the food and won’t let them take seconds. Kaoruko complains, and Fumi agrees, pointing out how overworked everyone is. The two begin to argue again, and Kaoruko cuts them off, pointing out that the desert island is the perfect stage for them to “go all out” and the two begin to fight. Akira talks about Fumi’s betrayal of the Edels, how she left without saying anything to Akira, and how she betrayed her trust and expectations. She says she knew about Fumi’s struggles but couldn’t reach out to her as anybody but Frau Platin, and that her responsibility is to keep Fumi off the stage forever if she continues to run away. Fumi expresses how Rinmeikan has given her a new stage to stand on, and that she isn’t running away. The fight is mostly a tie, until the squirrel from earlier appears and Akira protects the squirrel instead of attacking Fumi, giving her the upper hand to win the fight.

After the fight, it’s revealed that Akira has been eating less to make sure everyone else gets enough food to ensure they could still eat even if their food sources ran scarce. Akira agrees to allow Fumi to help more and congratulates her for returning to the stage. Fumi promises that she won’t just keep things to herself as well. The overall tension of the group is lessened as a result, although Fumi and Akira still bicker.

A boat arrives on the beach, and some ruffians appear, led by Walston, and demand the group give their food up. The name Walston causes everyone to realize they’re in Two Years’ Vacation. They defeat the ruffians and make a run for the boat to get off the island, completing the Re LIVE and ending the stage. The group comment on all the signs they hadn’t noticed that pointed to the story. Lalafin remarks how scary it was to watch Fumi and Akira fight like that, but Kaoruko says that it’s the path every stage girl must eventually walk down. The event ends with Lalafin wondering about a time where she must fight the rest of Frontier.

Playing stages allowed the user to obtain boss keys, which could then be used to fight the event boss Violent Castaway. Event stages had an increased drop rate for boss keys.

Defeating event bosses allowed the user to unlock event stories and obtain Cans, which could be used to pull in the event's lottery for rewards.

Stage Girls released for the event allowed the user to inflict greater damage on the event bosses, and damage dealt to each boss was carried over in subsequent fights if the boss was not defeated in that fight. 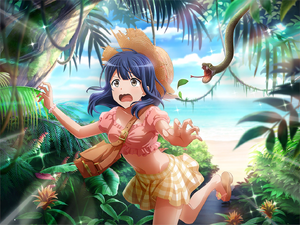 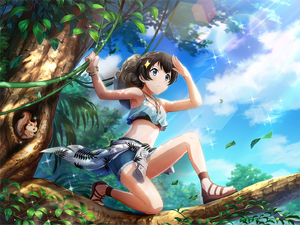 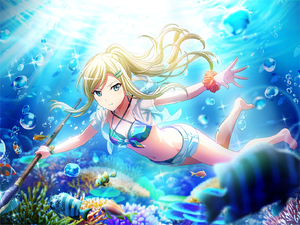 Retrieved from "https://revuestarlight.fandom.com/wiki/Stranded_Stage_Girls?oldid=12211"
Community content is available under CC-BY-SA unless otherwise noted.