My efforts will bear fruit! I'll become a star with Mahiru!

Seiran General Art Institute Stage Department Performance Major, Sub Leader. Mahiru's junior high school friend. She was close to her but also saw her as her rival. The two get separated after Suzu collapsed during a joint practice.[2]

Suzu has short dull green hair that goes to her neck. Part of it hangs over the left side of her face. On the right, it is braided and behind her ear. She has purple eyes.

Her school uniform consists of a plaid blazer of red, blue, and purple stripes. Suzu wears her blazer opened. There are two buttons that close the blazer at the stomach. The Seiran school emblem is on the right breast of the blazer. Underneath the blazer she wears a white button-up shirt with a black tie. Her skirt is a plain brown one. She wears just below the knee black socks and black flats.

Suzu'a practice/casual outfit consists of a hoodie, shirt, and shorts. The hoodie is black and blue. The main body is blue, leaving the hood and sleeves black. There are three blue stripes on the upper sleeves and the cuffs are also blue. On the left shoulder, it bears the Seiran school symbol as well as letters spelling out "Seiran" going down the sleeve. Suzu wears it unzipped, exposing a white shirt with a thin blue line right above her chest. She wears black shorts with it.

Suzu’s Revue outfit consists of a black and white long sleeved shirt with a collar. The middle of the shirt is white while the rest is black. The sleeves have the underside as white and the rest as black. On her right breast there is a zipper. She wears a black belt around her waist over the shirt. The belt has a stud pattern on it. She wears a blue skirt with the right half having silver stripes down the creases and the left half being plain blue. Hanging off the skirt is a pale purple cloth that goes to knee length. She wears thigh-high stockings of black with three blue stripes on the top. She also wears black boots with black laces. The right boot has two white bracelets around the ankle. The left boot has a patch of gold toward the top on the left side.. she wears light grey fingerless gloves that also expose the top of the hand. She wears a metal plate around her right shoulder that has small strips hanging off of it. It is attached to her by a rope around her neck. The plate has a transparent grey cloth with a design on it underneath. She wears a studded choker around her neck.

Suzu is an out-going girl. She is very hyper and energetic. Suzu is one for teasing Hisame and Koharu sometimes.

Suzu attended Kitachian Junior High School, where she was the ace of the cheerleading club. After she watched Mahiru Tsuyuzaki perform at a baton twirling competition, Suzu became determined to catch up to her. She eventually enrolled at Seiran General Art Institute, where she befriended Koharu Yanagi and Hisame Honami.

Their friendship began one day in middle school, when Suzu caught Mahiru practicing her baton twirling on the school’s rooftop. She was dazzled by Mahiru’s skills and proposed a joint practice. Determined to become as good at baton twirling as Mahiru, Suzu began spending all of her time practicing. As a result, Suzu overworked herself to the point of collapse during a joint practice. This, however, did not discourage Suzu, and she carried her desire to be on par with Mahiru for the next two years.

Their reunion during Seisho Music Academy's Cultural Exchange Program with Seiran General Art Institute was initially tense, which culminated in the Revue of Summer Sky. Hikari Kagura attempted to dissuade Mahiru from giving in to Suzu, but to no avail and ultimately Suzu won the battle. In the end, Suzu made amends with Mahiru before returning to Seiran.

[Star of the day] Suzu Minase 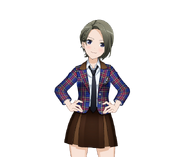 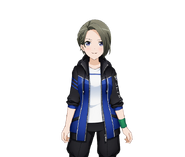