My dream? World peace and happiness for everyone, I guess.

The pineapples in sweet and sour pork

Haruka Kudo
Yachiyo Tsuruhime (鶴姫 やちよ, Tsuruhime Yachiyo) is a character in the Shōjo☆Kageki Revue Starlight franchise, original to Re LIVE. She is one of the distinguished students from the Music Acting Department at Siegfeld Institute of Music with the title of "Frau Perle".

This Stage Girl keeps her intentions hidden and she is rather elusive. Often angers people like Akira Yukishiro and Liu Mei Fan with her mischievous antics. Has a knack for sewing and design, and dreams of becoming a star who takes the stage in costumes of her own make [2].

Forever and ever, I have performed by myself. Polished a lonesome pearl.
Beyond the borders of the stage, beyond the play. That is where true platinum shines.
Frau Perle - Yachiyo Tsuruhime! This world is a stage. Even the king is a player!

Yachiyo's curly pink hair is styled asymmetrically, with most of it swept to her right shoulder and two red hair clips to keep the other side neat. Her bangs cover the left of her aquamarine eyes.

Meticulous about appearances, Yachiyo dresses fashionably. Her Siegfeld uniform consists of a grey sweater-vest over a white shirt, a red tie, a dark monochrome tartan skirt, red thigh-high socks, black shoes, and the Siegfeld uniform jacket wrapped around her waist.

Her casual outfit is a low-cut beige sweater, a pink skirt with a belt, and black thigh-high leggings. She wears a heart necklace.

Yachiyo's practice outfit consits of a navy blue leotard and white leggings. There is a gold pattern on the left side collar of the leotard. She wears a navy blue choker.

Yachiyo’s Revue outfit consists of a tight fitted formal vest jacket. The jacket has a golden trim and two buttons on each side, one below her breasts and one on her stomach. The buttons have a golden rope between them. She wears a pink medal on her left breast. The sleeves of the jacket have an oval shape of two golden connected lines on the upper-side of the sleeves. Underneath the jacket is a white formal shirt. You can see the collar and sleeves of the shirt. She wears a black skirt with an open slot on her left side. It goes down to her thighs. It has a golden belt around it with an emblem in the center. She wears see through black thigh-high leggings with the top being solid. She wears high black boots that are folded over at the top to look like a collar. The boots’ collar has a gold trim. Going down to halfway of the boots are yellow laces. The boots have heels. Around her shoulder is a jacket. The main color of the jacket is white. It has gold trims and golden ropes at the collar. One rope is tied loosely around her chest to hold it on. The underside of the jacket is pink with three unconnected golden stripes toward the bottom. On the outside, the jacket has four inches of the edge being a light pink. Right above the light pink are three unconnected gold stripes. The jackets sleeves are cuffed, having a golden trim and a golden button.

Formerly regarded as deliberately elusive with questionable motives, she's now opening her heart to those around her, little by little.

Often seen as laid-back, Yachiyo is a stage girl who doesn't spare effort in things that interest her. This works as a double-edged sword: while her concentration on things such as sewing and acting is unrivaled, rarely does she indulge in things that don't catch her eye unless she needs to.

Yachiyo places great importance in the dynamic between seniors and juniors. This is shown in her relief that she doesn't have to "play senpai" to Akira,[3] and going as far as to cook for everyone in Detective Karen on the Case. In the latter case, she didn't let Shiori (her junior) handle it, as "doing menial labor (for her seniors)" is "just a her thing".

Moreover, she naturally defers to her seniors, keeping a polite tone even when telling one (such as Tsukasa Ebisu) off. In fact, she apologizes profusely after the deed. This, along with her general tendency to humble herself, makes characters like Akira Yukishiro comment that she should be less modest given her status as an Edel.

When performing, she doesn't pay any mind to concepts like honor or glory. Rather, she performs for the sake of it, pursuing her own perfection without changing it to fit anyone else's standards. Because she started out rather distant from her peers, it's not until much later that her sincere and serious side, acting-wise, comes out. When she sees someone else disrupting the pace of a show, she firmly tells them off for it before trying to find a solution with them.

She is very excitable when it comes to her interests. When asked about one of them, she either warns that she ends up going on tangents about it or she immediately begins rambling, much to the shock of the person she's talking to. Because this eccentricity is the type she's used to hiding, she really only does the latter around people she's close to, like the Edels. Conversely, as she knows what it's like to be alienated from others due to one's interests, she always pays attention when other people talk about their interests and never belittles or ignores them, even if she doesn't understand them that well.

Despite living life on her whims, Yachiyo can be described as very pragmatic. She operates on what she stands to gain and lose realistically, looking to achieve the biggest goal first and foremost. Her "laziness" is often a result of her deduction that a situation, no matter what she does, will not benefit her whatsoever. A curious quirk to this is that, for that goal, she'd give up any sort of honor code if it hinders her on her journey to grasp victory.

Perhaps a result from it being her only sanctuary in a life of isolation, Yachiyo doesn't seem to separate herself from acting and the stage. She claims that if the stage disappears, she'll disappear along with it.[4]

Yachiyo: "...Playing the role of someone else, or daydreaming of being somewhere else."

Yachiyo: "My parents, my classmates, my teachers... They never understood that part of me."[5]

Not much is known about Yachiyo's past, on one hand because of her role as a spy, and the other because she isn't used to being honest about herself and the things she loves.

Growing up, her imagination and love for acting clashed with everyone, even her parents. With nobody there to understand her, Yachiyo grew up lonely. Because of this, she hid this part of herself out of shame until attending Siegfeld, wherein she finally found someone as "stage-crazy" as her, who assured her that the traits people looked down upon are actually the strengths of a great stage girl.

Akira and Yachiyo have a good senpai/kohai relationship going on between them. Akira was the first person to reach out to her at Siegfeld and tell her to be her true self. Yachiyo wants to become the next Frau Platin after Akira and as such does her best to keep pace. Akira guides her along where she needs it, helping her to reach her full potential.

Their relationship in-game has been described as that of a cat and mouse. Michiru has tried cornering Yachiyo at various times about what was inside her suspicious notebook. The one time Yachiyo almost got caught, she only managed to throw Michiru off her scent with an outrageous lie about what was inside.[6]

After the events of Dying King, they keep up this tense little game between them, though it's more about Michiru trying to get Yachiyo to do well rather than some concrete secret like before.[7] Michiru sees in Yachiyo what she saw in Akira "that day".

Mei Fan is fiery and passionate, and this passion ignites the heart of the comparatively much-less proactive Yachiyo. Intentional or not, Mei Fan's provocation is one of the few things that draw out Yachiyo's true strength, which can outshine even her own.[4]

Aside from that, they're very good friends. Mei Fan is very supportive of Yachiyo, from enthusiastically engaging in her interests to cheering her on in her sewing endeavors. Even when Mei Fan admits she can't figure her out,[8] she'll always be by her side.

Under the veneer of constant teasing, Yachiyo cares for Shiori a substantial amount. This manifests in the fact that while the Edels as a group are known to dote on Shiori, she herself can be quite firm.

Particularly, she keeps an eye Shiori's tendency to "identify with her role too much," for which she berated Shiori (quite harshly in the eyes of the Frontier students accompanying them) for in Venus & Cupid. She has also reined in Shiori when she was on the edge of overexerting herself during the second act of Arcana Arcadia.

While there's only a few pieces of info about Fumi's time in Siegfeld, a fair amount comes from Yachiyo. Yachiyo herself seems to know much about how Fumi thinks, down to accurately deducing her reasons for not contacting Shiori after the Revue of Gemini.[9]

They realize in their conversation that they've both changed in drastic ways since they've last met, and acknowledge this fact as they go on talking before parting ways. They have not interacted much outside of this.

Tsukasa is a close friend of Yachiyo's, having been leads together in Arise All You Sons. Tsukasa faced Yachiyo's severity head-on when Yachiyo dared her to get off the stage if she can't emotionally handle the role of the lead, before being helped and supported until the end. It's implied that Yachiyo, too, would have quit being the co-lead if Tsukasa stepped down. [10]

Yachiyo's character, Sonoko, harbors feelings for Tsukasa's character, Sachi.[11] She says she wants to keep the relationship Sonoko and Sachi had for her and Tsukasa, though she claims she's only kidding.[12] The next show they star in together features Yachiyo and Tsukasa as Julius Caesar and Cleopatra, known lovers.

Smirking Behind the Pillar

Present for the Detective

Day Off for Two 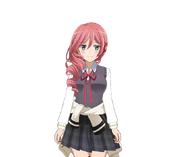 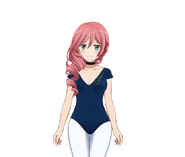 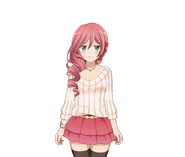 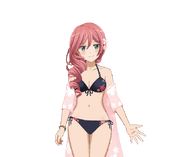