Yuyuko Tanaka (田中 ゆゆ子, Tanaka Yuyuko) is a character in the Shōjo☆Kageki Revue Starlight franchise, original to Re LIVE. She is a first-year student from the Performance Department at Rinmeikan Girls School.

Yuyuko prefers staying up late and sleeping during the day, and is always tired at school because of this. She hides any hint of putting in effort, and works hard in secret. Fond of traditional Japanese performing arts, she especially likes rakugo storytelling. Her music playlist is almost entirely comprised of rakugo performances.[2]

One — Feelings hidden within ourselves. Two — The stage brought them together.
Three — For our future play. Four — I will show you the strength of traditional theater!
Rinmeikan Performance Association - Yuyuko Tanaka! I will put my life on the line!

Yuyuko has shoulder-length peach-colored hair that she generally wears loose and split in two even sections over her shoulders, with blunt bangs that are slightly parted on the right side. She accessorizes the left side of the longer outer section of her bangs with three red hairclips in the shape of a Z. Her eyes are a red ochre.

School Uniform
The Rinmeikan students wear a sailor-style uniform, described by Fumi as being quite retro. It consists of a waist-length black blouse has a white sailor collar decorated with a single black stripe, matching the cuffs of the bishop-style sleeves, and a chest flap in the same color of the uniform that is conversely decorated with a single white stripe. A red ribbon is worn as the traditional ornamental tie. The blouse is worn over a knife-pleated pinafore dress in black that is decorated with two golden buttons placed horizontally along its waist, making them visible through the front opening of the blouse. Yuyuko wears her uniform with a red hoodie, with the hood usually being up, and with brown crew socks and lace-up boots.

Casual Outfit
Yuyuko wears a shirt depicting a sleepy mascot and a beige skirt with red and blue awning stripes. She wears a red zip-up red hoodie with the hood down.

Practice Outfit
Yuyuko's practice outfit consists of a crimson leotard with sleeves above the elbow. Underneath it, she wears white tights.

Revue Outfit
Yuyuko's revue outfit consists of a mini kimono that fades from a lighter to a darker tone of crimson. The collar has golden piping and a black lace han eri, and the sleeves and bottom hem have a gold band in an over-under pattern. The kimono has an opening on the right which shows a white skirt with box pleats and a gold band, underneath which she wears a black petticoat. She wears an imperial purple obi with golden piping on top and a bottom slit down the front, underneath which she wears a black obi-age, and over the both of which which she wears a thick red ribbon which ties as a bow in the back and an obi-shime consisting of a gold chain with an obi-dome in the shape of a golden butterfly. She wears black over-the-calf boots resembling jika-tabi with a golden trim and heels, with bright red ribbons tied around the ankles and knees. Yuyuko wears a red spaulder with gold edges and red tassels, tied to her arm with a red ribbon and over her shoulder with a golden string, and a hairpin in the shape of a red butterfly wing on her hair.

Yuyuko is typically a sleepy girl, and always carries a pillow with her, even during class. However, in spite of her sleepy appearance, she is actually a smart and well-educated student, often becoming very serious when it comes to studying and rehearsals, though her sleepy attitude undermines her ability.

Rui and Yuyuko became fast friends during their first year at Rinmeikan. Rui is the only person to call her Yukko. However, she is also annoyed with Yuyuko due to the latter's sleeping habit.

Although they only met at the start of the year, Tamao and Yuyuko share a close bond. Yuyuko admits in her Little Red Riding Hood bond story that she considers Tamao as an ally and a senpai moreso than a friend. Nonetheless, they spend lots of time together. In a "My Theatre" conversation, Tamao says she misses seeing Yuyuko's dog, Momoko. Similarly, Yuyuko has visited Tamao's family's restaurant along with the other girls.

Like Tamao, Ichie shares a close bond with Yuyuko. Sometimes they spend time singing karaoke together, as seen in one memoir. In one of Yuyuko's menu screen lines, she says that she doesn't need to treat Ichie in any special way just because she's older, and adds that it's a good thing.

Not a Late Riser, Just a Night Owl

The Idol of the Room

A Little Friend on a Snowy Day

I Can't Help that I Had Fun

[Star of the day] Yuyuko Tanaka

To the Wonderful World of Rakugo 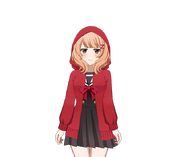 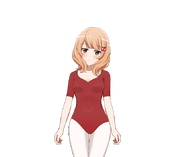 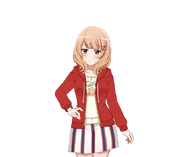 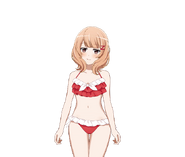 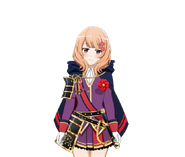